US stocks slide on economic tremors from Europe 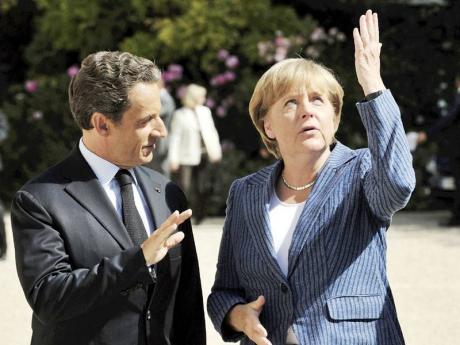 A collection of worrying news out of Europe sent stocks sharply lower on Monday.

New reports showed that European government debt continues to pile up despite severe budget cuts, which have led to unrest across the continent. The government of Holland collapsed Monday and French President Nicolas Sarkozy lost the first round of the country's presidential election to a Socialist candidate.

The Dow Jones industrial average dropped 148 points to 12,880 as of 2 p.m. in New York, following steep declines in Europe. The euro fell against the dollar, oil prices sank and United States (US) Treasury prices edged higher.

"The main concern today is the stability of the Eurozone as a whole," said Dan Greenhaus, chief global strategist at the brokerage BTIG.

Figures reported by the European Union's statistics office confirmed the effects of budget-cutting programmes on countries that use the euro currency. Even with widespread spending cuts, overall debt rose to 87.2 per cent, the highest level since the euro was created. Separately, a survey of the Eurozone's manufacturing and services sectors unexpectedly fell in April.

In France, Sarkozy came in second behind Francois Hollande, a harsh critic of the spending cuts prescribed as a way to end the region's debt crisis. Sarkozy and Germany's Chancellor Angela Merkel have been the main architects of Europe's efforts to avoid a collapse of the region's shared currency.

"To the extent that Europe has any leaders, it's very much Merkel and Sarkozy," Greenhaus said. "If Sarkozy were to lose, you'd change the leadership of Europe at arguably the worst possible time."

Traders shifted money into Treasurys on Monday. The price of the 10-year Treasury note rose, pushing its yield down to 1.92 per cent from 1.96 per cent late last Friday.

David Kelly, chief market strategist at J.P. Morgan Funds, said it looks like investors are looking for a reason to take profits after stocks soared in the first three months of the year. The S&P 500 index rose 12 per cent in the first quarter, its best start since 1998. Many investors Kelly talks to see no reason for the market to push higher.

"There's a complete lack of enthusiasm," he said. "And it's making stocks cheap and bonds expensive."

Concerns over Europe pushed the price of oil down nearly two per cent Monday. Benchmark West Texas Intermediate crude dropped $1.68 to $102.18 per barrel in New York.