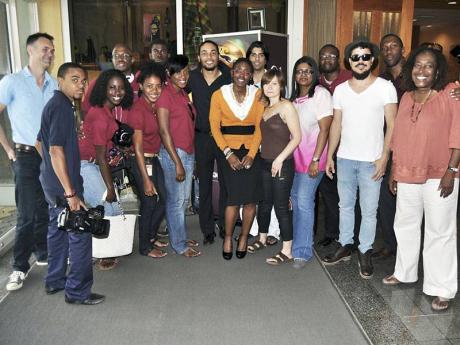 'Marley: The Definitive Story' production team members pose for a photo with student directors from the Northern Caribbean University (NCU), local film-makers and JAMPRO officials at a workshop organised by JAMPRO, through the Film Commission, on April 19 at the Trafalgar Road office of JAMPRO. - Contributed

Student directors from the Northern Caribbean University's (NCU) Lignum Vitae Film Festival had the opportunity to rap with Dan Glendenning and Geraldine Hawkins, the editor and line producer, respectively, of the recently released documentary Marley: The Definitive Story, at a workshop organised by JAMPRO, through the Jamaica Film Commission, at the agency's New Kingston office last week.

The two-hour session featured insightful discussions on the art of film-making, with a particular focus on the documentary genre. Hawkins emphasised the importance of having a strong and compelling story, which must be guided by a specific vision. She also encouraged the young film-makers to identify ideas and stories that excite them and to continuously work at those ideas and stories consistently.

Drawing from the experience of Marley: The Definitive Story, which focusses on the life of reggae icon Bob Marley, Glendenning noted that it was important to get the views of everybody involved in the story in order to present a complete picture. He pointed out that the film's director, Kevin Macdonald, went to great lengths to ensure he got interviews with persons who had never before been interviewed for any major production on Marley. One such person was a janitor from Studio One, who shared a room with Marley in his early years.

Glendenning likened the documentary film-making process to putting together a jigsaw puzzle from the available shots and interviews. Avi Mohla, assistant editor of the documentary, disclosed that the more than 3,500 hours of footage was filmed for the documentary.

In Glendenning's closing remarks, he praised the students on the quality of their work, some of which were screened during the workshop. He stated that Jamaica's rich culture and beautiful scenery made the country a great place to be a film-maker.

Local filmmakers Storm Saulter and Tanya Taylor, vice-president of the Jamaica Film Producers' Association and one of the judges in the Lignum Vitae Film Festival, were also in attendance at the workshop and imparted their knowledge to the student directors.

Kim Marie Spence, JAMPRO's creative-industries manager and film commissioner, said she was heartened by the positive response to the work of the NCU student directors.