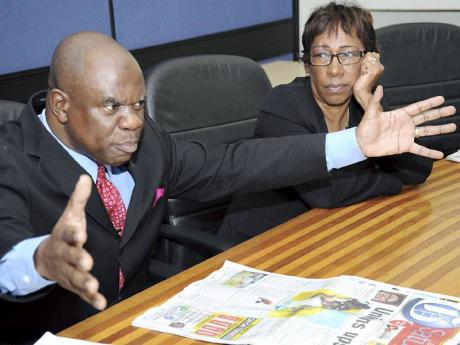 DESCRIBING delays in the country's court system as chronic, the leaders of the Jamaican Bar Association say abolishing preliminary enquiries could be one cure to the malady.

"It is a total waste of time, nothing happens there," said Valerie Neita-Robertson, vice-president of the bar association.

Neita-Robertson said abolishing preliminary enquiries would go a far way in cutting out delays in the court system.

The position put forward by the bar association officials represents a major change in its thinking on the issue.

Ian Wilkinson, president of the bar association, noted that the move was "a major suggestion that the Bar has taken on in recent times".

The attorneys argued that the proposals in the Committal Proceedings Bill do not go far enough in helping to cure the ills created by the existence of preliminary enquiries.

In making the case for abolishing preliminary enquiries, Wilkinson said it was both a waste of the court's time and a potential impediment to justice.

"If you are the witness, you do the case twice, and quite often before it is finished before the Resident Magistrate (RM), where the RM says there is a case to go to the Supreme Court for trial, you would have gone to court three, four, five times," Wilkinson noted.

He added: "It is not easy being a witness in Jamaica. When you are brave enough to go to a court four times and then you have to pick up yourself and go to a different court again, it's nonsense."

Many defence lawyers over the years have argued for preliminary enquiries to remain, saying they give them two bites of the cherry and allow them to expose untruthful witnesses.

Wilkinson argued that no more than one bite of the cherry is necessary to help the court determine the guilt or innocence of a subject.

"We are ministers of justice, our friends, our family, our next door neighbours are being affected by all of this and we can't be aloof to it."

Similarly, Neita-Robertson said there was one real reason for liking preliminary enquiries.

"When witnesses are coached or they are not usually forthright you normally capture them early because they have studied the statement and they come and they give it. When time passes and they go up there it is easier," she said.

"But I believe that at the end of the day, taking all of that into consideration, if you prepare your case properly as a defence attorney you can bore holes," she added.

Parliament last year passed the Committal Proceedings Bill into law, allowing for indictable offences to be sent to the Supreme Court without a preliminary enquiry.

At the time, then Justice Minister Delroy Chuck said defence lawyers were unfairly enjoying the fruits of preliminary enquiries.

"I am a defence lawyer and, I can tell you, the only people preliminary enquiries assist are defence counsel," Chuck said in the House of Representatives.

Clive Mullings, when he was a legislator, warned that abolishing preliminary enquiries from local jurisprudence would create an unprecedented administrative nightmare for the Office of the Director of Public Prosecutions (DPP) and the court system.

"I tell you that the DPP can in no way deal with all these cases coming before her, so you are back to the resource issue," he said.

"If you think that the legislation is the cure-all, we are making a terrible mistake and we are going to repeat history," he warned.

Attorney-at-law Frederick Hamity, in a letter to the Editor, also expressed support for the retention of preliminary enquiries.

"The defendant has a right to a fair trial and the preliminary enquiry is a very important part of ensuring that a fair trial occurs. We must be careful about the proposal of eliminating these hearings lest we save time and diminish liberty," he wrote to The Gleaner.