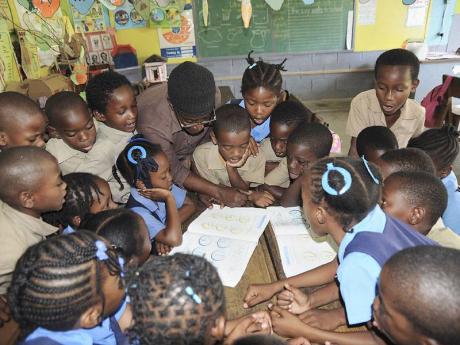 Up in the hills of Trelawny, in a district called Stewart Town, lives an elderly woman called Aunt B.

At age 63, Aunt B, whose real name is Berlie Henry, readies herself every morning and heads to the Stewart Town Primary School where she spends an entire day as a teaching assistant.

That has been her routine for the past four years, ever since she decided she would volunteer her service at the school.

"She has a grandson who came to us in grade one. She felt that he had special learning needs. From her perspective, he was not advancing as he should with his academics, and so she came to school and she would sit with him during the days," Principal Beverley Gordon told The Gleaner.

Gordon said that after Aunt B got permission to sit with her grandson in his class, she became involved in the life of the school.

On a recent Gleaner visit to Stewart Town, Aunt B, barely showing signs of having reached retirement age, appeared to be at home with her students.

"I am really enjoying it. I enjoy being with the teachers, I love the children, I really love them... . The environment is quite all right so I am happy," she told The Gleaner.

Aunt B has become such a part of school life that she even attends teaching workshops with members of Stewart Town Primary staff.

"If the teacher has to go to the bathroom or the teacher is absent she should fall in and hold that class. (Education) officers have come, they have seen her and she has been commended for her effort. You would come and if she is holding that grade-one class you cannot tell that a teacher is not in the classroom," Gordon said.

She said such is the dedication of Aunt B that if she is not able to attend school on a particular day she would telephone to advise the teachers.

"Even people who are much younger are not interested in giving that kind of persistent, consistent and dedicated service. It is just awesome," Gordon said.

In the meantime, asked what has been the reaction of community members to her decision to volunteer, Aunt B said some of them bluntly ask her if she is getting paid.

"I say to them no, volunteers don't get pay. I am enjoying myself, I come to the school and I help. It does not matter one bit that I am not getting paid," Aunt B said.