Computer in a beer crate 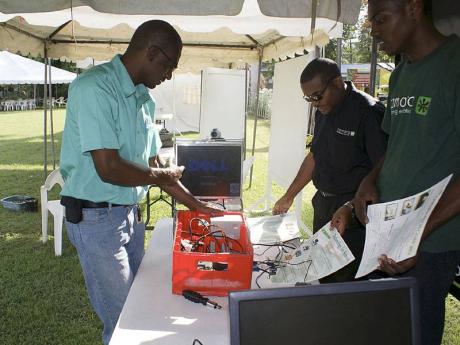 Innovation and creativity were put to the test recently as students from the Penwood High School, working with the Camara Jamaica Foundation, constructed a computer from a Red Stripe beer crate, scraps of metal and other waste material.

The Camara Jamaica Foundation trains volunteers under the Career Advancement Programme in computer repairs at the school.

Initially the unit was made as a part of the Environmental Foundation of Jamaica Earth Day Expo 2012, where schools were invited to participate under the theme 'CPR (Conserve, Protect, Recycle)'. Students were invited to present a display on how they could recycle materials to make items which may be used in the learning process.

"It was basically an idea to enter under technology considering our type of organisation. The idea was to demonstrate that a computer can be built within anything as long as the right components are installed. It also sheds light on the whole notion of recycling" said Karl Gaynor, chief executive officer (CEO) of the Camara Foundation.

The monitor was installed on a sheet of metal and components from old computers that are generally thrown away were used.

"The feedback was good, a lot of persons were impressed with what we did and it works well. Especially since we had one day to build it, the students were practically up all of Thursday night building it," Gaynor added.

Since creating the computer, the team is looking to expand its creative ideas and will attempt to create a laptop within a pizza box.

"Building a laptop will be a little more difficult because the screen has to be attached directly but it can be done. We are also looking at other creative methods of building desktop computers," Gaynor said.