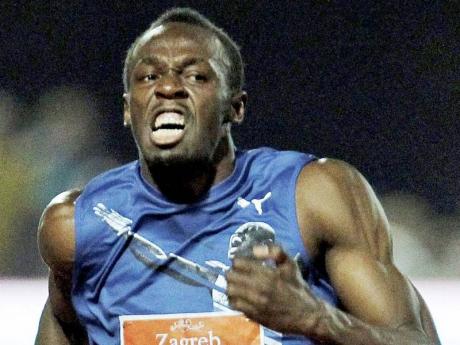 It has been confirmed: world record holder and Olympic champion Usain Bolt will run his first 100m of the year at the JN Jamaica International Invitational (JII) track and field athletics meet at the National Stadium on May 5.

The Racers Track Club superstar made his first appearance two Saturdays ago at the University of Technology Track and Field Classics, where he ran the anchor leg in a 4x100m relay and outpaced former world record holder Asafa Powell of MVP to lead Racers to world-leading 37.82 seconds win.

Bolt, who twice set world records in the event - first at the Olympic Games in Beijing in 2008 (9.69) and a year later at the IAAF World Championships in Athletics in Berlin (9.58), will follow up his Kingston assignment with other 100m runs in Ostrava, Rome and Oslo, as he continues his preparation ahead of this summer's London Olympics.

This also means that the 200m world champion and world record holder will make his first appearance in the half-lap event at the Jamaica Athletics Administrative Association/Supreme Ventures National Senior Championships, set for the National Stadium, June 28 - July 1.

The JN Jamaica International Invitational is also expected to feature a big showdown in the men's 200m with the second-fastest man over the distance in history, Yohan Blake, tipped to face-off with Powell as the headline contenders.

As things stand, Olympic 100m champion Shelly-Ann Fraser-Pryce will open up in the 200m as she continues where she left off last season, focusing her attention on increased strength this season in an attempt to improve the latter 30m of her 100m.

Fraser's 200m entry means that fans won't see a clash against current 100m world champion, Carmelita Jeter, who will once again run the shorter sprint, like she has been doing over the past couple years.

Jeter, who won ahead of World Championships bronze medallist Kelly-Ann Baptiste and Jamaican pair of Sherone Simpson and Kerron Stewart with an impressive 10.86 at last year's meet and 10.94 the previous year, opened her season with a world-leading 22.31 in the 200m at the Rafer Johnson/Jackie Joyner-Kersee Invitational at Drake Stadium just under two weeks ago.

Also expected to feature at the meet is Olympic 400m hurdles champion, Melaine Walker, who is also yet to make an appearance this season.

World 400m champion Sanya Richard Ross and long jump world champion Brittney Reese, the only woman to go over 7m so far this season after her 7.04m jump two weeks ago, are also expected to feature.