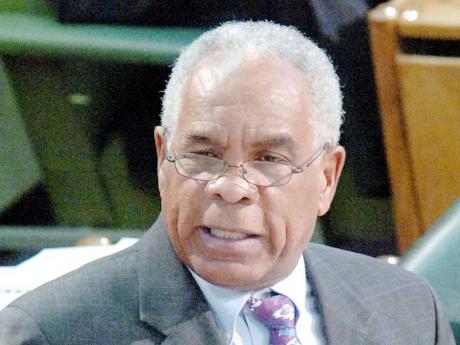 A SENIOR member of the Government has declared the administration will not allow the Office of the Contractor General (OCG) to be a stumbling block in the engagement of private entities as the state moves to take advantage of investment opportunities.

"This is not picking a fight with the contractor general. He has his work to do, but not only do we have our work to do, but we (also) have an obligation to respond to the real needs in the society for economic development," Dr Omar Davies, the minister of transport, works and housing, told members of the House of Representatives yesterday.

Davies, who is also acting prime minister, in a statement to Parliament announced that an independent oversight panel has been established to expand the framework for monitoring the award of contracts.

The body is to be chaired by Professor Gordon Shirley, principal and pro-vice chancellor of the University of the West Indies, Mona. He is to be joined by businessman R. Danny Williams, and Everton McDonald, a retired territory senior partner at PricewaterhouseCoopers.

Davies announced the establishment of the panel while revealing that Cabinet has given approval for the continuation of three projects - the completion of the north-south link of Highway 2000; the Gordon Cay Container Transhipment hub, and the Fort Augusta Container terminal.

The OCG, headed by Greg Christie, had expressed it was not in agreement with the direct negotiations with investors in relation to these three projects. The office had said the projects should be subjected to competitive tender.

Yesterday, Opposition Leader Andrew Holness and North Central Clarendon Member of Parliament Pearnel Charles said they were uncomfortable with the reason for which the panel has been established.

Holness questioned whether Davies was seeking to replace the OCG with the panel.

"The challenge that the minister is facing is one that we face and while the Cabinet is charged ultimately with making the decisions about the direction in which the country goes, the Cabinet also set up an Office of the Contractor General - through the Parliament - to ensure that the contracting process is one that is integrous," Holness said.

Holness argued that the competent body to deal with the contracts was the OCG.

"The problem is that you may very well run up into a legal obstacle should the contractor general decide to test the law. You may very well have to start looking at the legislative arrangements," Holness added.

However, Davies was unwavering.

"We do not accept impotence as an option," he said.

"This administration, this Parliament, is very much aware of the knife's edge in terms of the timing and we would suggest that it is not apparent that this understanding of the fact that investors are not going to hang around in perpetuity, hoping that you may come to a decision," Davies said.

He added: "What we are seeking to do is to do the right thing and to ensure that the public is assured that there are other persons ... who have assessed what we are doing."

He said: "It cannot be that 63 members are all so tied together in a narrow, focused attempt to deceive the people and one office is the only correct one," Davies added.

In making the announcement in Parliament yesterday, Davies noted that the OCG has consistently raised issues with and has objected to the procurement method being utilised for the proposed projects.

Davies, however, noted that the Government of Jamaica Procurement Handbook, 2010, provides for engaging investors through the direct negotiations process once an initial determination of the merit of the proposals has been undertaken.

"This administration recognises the role of the Office of the Contractor General and we will respectfully respond to any legal request, etc., from that office," Davies said.

He added: "This administration also recognises the right and obligation of Cabinet to take decisions which will redound to the benefit of the country."

The minister said: "It is imperative that the OCG and any other office be aware of economic opportunities.

"This is a hard, cruel world. Nobody is out there waiting to do us a favour and you can't tell the people of Jamaica that we missed the opportunity of garnering investments in excess of $1 billion because we were awaiting a ruling," Davies said.

The minister had support from Opposition MP Karl Samuda, the spokesman on transport and works.

"The world today, when you speak of large investments, has moved away from this narrow notion that by competing among each other at this level you are getting the best price."

Samuda said what is looked at is project's viability and the reputation of the contractors.

He said the oversight committee consists of "men of high reputation and commitment" and that it would serve the process in a productive way.