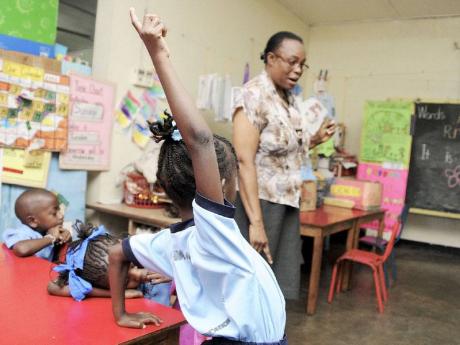 Marilyn Miller asks for a volunteer to point something out on the blackboard in her class. - Photos by Gladstone Taylor/Photographer 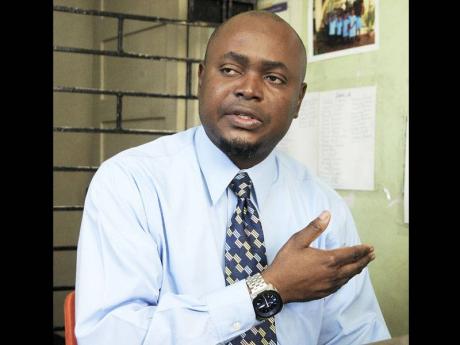 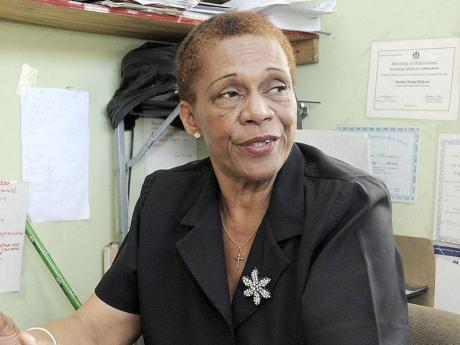 Four days into the new school term and it wasn't exactly a full house at St Simon's Basic School in Jones Town, Kingston.

This is not unusual as some parents cannot readily find the required $2,500 school fee for their children.

George Adlam, board chairman of the school, says the parents' inability to pay, coupled with the limited support the institution receives from the Government and sponsors, make it hard for the school to operate.

"The biggest concern that we have is that some parents can't afford the school fee we charge. Being in the inner city, a lot of the time we have parents who can't afford to find it," Adlam told The Gleaner during a visit to the school last Thursday.

According to him, the school was only able to collect 50 per cent of fees per term. This situation, he said, is crippling the school's daily activities. Some parents also failed to pay the $200 per week requested for lunch.

But even with the low turnout of students, the principal anticipates that there will be challenges ahead, including inadequate teaching staff and resources.

Last week, the three teachers present - of the four on staff - had their hands full throughout the day, as one by one fights got under way among the students and there were loud outbursts of crying, forcing them to pause their lessons to quell disputes.

It was clear that it was not an easy task for the teachers to cope in a school with a teacher-pupil ratio that is far from that recommended by the Early Childhood Commission (ECC).

While the ECC's standard is at most 15 students to one teacher, the grade-one teacher at St Simon's Basic is responsible for more than 30 children.

While the teachers were able to complete their lessons and other objectives for the day, it was obvious that some students were far from being clear on what was being taught.

Class-three teacher Sharon Gordon struggled to complete her lessons due to frequent disruption by some of the students.

These are the five-year-old students who have a little more than two months to go in the school year before they move on to primary school.

The activity for the morning was based on the theme 'Jamaica, Land We Love', and after completing the colours of the flag, the students had the responsibility of using blocks to identify different colours. It was a hard task for some and a walkover for others.

The class was separated into groups, but students sitting in one area were doing their own thing while class was in session. They played, made noise, and fought each other while other classmates focused on the work at hand.

One student from the group was chosen to identify the word 'yellow' on the board and, of course, he was unable to do so. It got worse when another of his team members was called on to write the numeral three. He was only able to write it after another student wrote it on the board.

For Gordon, it is a love for the school and the children that keeps her going throughout the days.

"They are from the inner city, so it takes a lot of patience to cope. There are good days and bad days, but all in all, I just have to be gentle with them," she said.

She expressed confidence in the students, saying most of them would be ready for primary school come September.

"We will have a few who struggle, but these are the ones who are not getting enough help at home. But I just have to work with them. Their attention span is limited, so grabbing their attention is difficult," she lamented.

"The influence in the community sometimes affects the students. Even when we do things to try to influence the children at school about values, they don't have the role models at home," she said.

Twenty-nine-year veteran teacher Marilyn Miller, of class two, had it a little easier for the morning and, in fact, for the day. Her class was extremely quiet, an indication that the students were listening attentively.

But when it was time for them to participate, it was the only time the silence of some of the students was unacceptable.

Principal Beverley Brown was kept busy all day. She walked from class to class monitoring the events and, at times, participating in the activities.

After an hourlong lunch break, when the children ate mackerel, white rice and vegetables, it was time to rest. That rest time ended close to dismissal.

The school compound was decorated with charts identifying numbers, letters, and words the students should know.

The teachers were determined to get the students to observe common courtesies such as saying 'thank you', 'I am sorry', and 'excuse me'. A few forgot at times, but they were quick to fall back in line after they were coaxed by the teachers.

Stressing the quality of the educators at the school, Adlam said the institution had two degree-trained teachers (including the principal), and one teacher with a diploma. The other two teachers are trained at National Council on Technical and Vocational Education and Training level.

However, only the principal, who is being paid in full by the Ministry of Education, receives a salary in line with her qualifications.

'The influence in the community sometimes affects the students. Even when we do things to try to influence the children at school about values, they don't have the role models at home.'