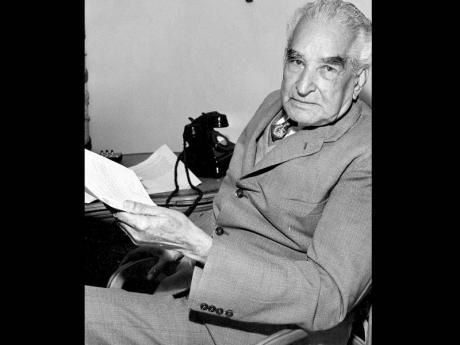 "I am very pleased at the unusually high standard of intelligence displayed by the first batch of volunteers for the Jamaica National Reserve and I am optimistic that the reserve will be able to reach a very high standard in a comparatively short period of time."

So said Brigadier John Lindner, secretary of the force, at the end of the first day's recruiting for junior NCOs and men at Reserve headquarters.

All the 60 men interviewed and tested yesterday were men who had applied off their own bat to join the defence force.

Those interviewed yesterday were gardeners, tradesmen, carpenters, shopkeepers, civil servants and clerks, etc. Most had a high standard of education, some holding even higher-school certificates.

The selectors are all Jamaican, as it is felt that they will know their own countrymen best.

SIR ALEXANDER Bustamante became the head of Jamaica's Government once again yesterday morning as he took the oath of premier.

The Jamaica Labour Party (JLP) leader took into office with him 13 other persons, 10 elected on April 12 and three appointed to the Legislative Council to fill out the Cabinet.

Sir Alexander made some immediate changes in the ministries of Government, dropping the recently established Ministry of Culture and Welfare, attaching Welfare to Development (formerly held by Norman Manley), while at the same time relieving Development of the subjects of Economic development and mining.

Another sharp rise of 60 shillings per cwt (hundred weight) has taken place in the spot price of Jamaican No. 3 ginger in the London market. This brings the quotation to a new high.

Since the current year, the price of this commodity has nearly doubled on the London market.

Last year, ginger maintained a steady price. Shortage of this commodity in overseas circles has been named as the chief factor in the current spiralling of prices.

A shipment of 2,250 crates of ortaniques has been forwarded by the Citrus Growers Association (CGA) to Messrs Karpman, Yaphe Incorporated of Montreal, Canada in reply to the request made by top executives of that organisation on a visit to the island just over a fortnight ago.

After having handling an original shipment of 2.000 crates of ortaniques earlier in the citrus season, the firm requested that as much of this fruit, as the CGA could gather, should be collected and sent up to Montreal at once.

The original shipment of 2,000 crates was forwarded by the CGA to test the Canadian market for this variety of citrus. So good was the response, the president of the firm, Shemon Taphe, and two top executives, visited Jamaica two weeks ago in pursuit of further business.

One proposal to the CGA was that that the organisation should send to Montreal immediately as many ortaniques as it could collect for the remainder of this citrus season.