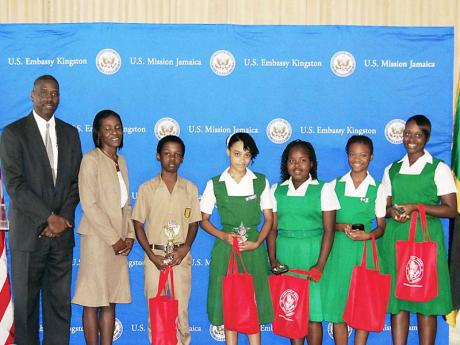 The awards ceremony was held at the Northern Caribbean University (NCU) Mandeville campus on Monday.

The Ambassadors Academic Achievement Award is the brainchild of Pamela Bridgewater, United States ambassador to Jamaica, in a move which started last June to recognise students who have excelled academically and to motivate others to strive for excellence.

Ambassador Bridgewater was unable to make it to the awards ceremony and was represented by Isiah Parnell, deputy chief of mission at the US Embassy.

Parnell told The Gleaner that he was pleased with the programme. "We think it's a great initiative. It's something near and dear to the ambassador's heart," Parnell said.

He added: "She is pretty much involved in improving education here in Jamaica. She is a lifetime educator. She was an educator before she joined the Foreign Service, so this is a very small way of trying to highlight academic achievement to let people know how important it is to achieve excel academically."

The categories for the awards were Most Improved Student, Overall Performer in Reading/ Literature, overall performance in math/science, and the overall outstanding performer for each school.

In attendance at the awards ceremony were Mayor of May Pen Scean Barnswell, whose daughter Shante received the award for the overall outstanding performance at Vere Technical High School.