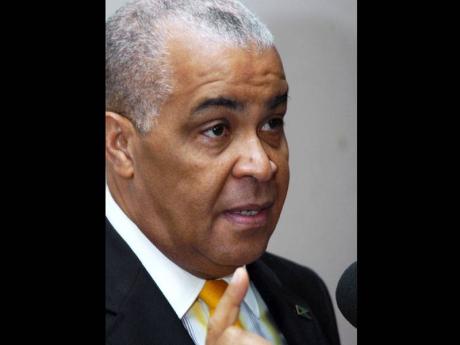 WITH THE 2012 Budget presentation just over a month away, Water, Land, Environment and Climate Change Minister Robert Pickersgill has said he will be pressing for increase allocation to better equip his ministry to deal with urgent climate-change issues.

Following his address at the European Union (EU)-sponsored Global Climate Change Alliance Technical workshop at the Ritz-Carlton Golf & Spa Resort in Montego Bay, Pickersgill told reporters that the Government has no choice but to spend exorbitant sums to deal with the effects of natural disasters.

"In terms of the gross domestic product on an annual basis, a lot of the monies that we lose are for weather-related losses," Pickersgill said. "In Jamaica, the costs are horrendous, so much so that we move from one to the other without repairing what had happened before.

"I have the responsibility to convince my Cabinet colleagues, in terms of the budget, for more money... more allocations must come to my ministry, and I am not being selfish about it, but climate change touches and concerns every other ministry," added Pickersgill.

He further underscored the Government's commitment to mitigate the effects of climate change. A national policy is now being finalised.

"We have also moved towards finalising our Climate Change Policy and Action Plan and have appointed a National Climate Change Advisory Board. It is our avowed intention that by the end of the year, or before, we would have established a Climate Change Department," stated Pickersgill.

He also noted that there was an urgent need to address the degradation of the north coast due to climate change, as it could have a negative effect on the island's fragile tourism product.

"Coastal degradation is going at a rate that must be arrested, because if it is not arrested, it will affect our beaches and tourist arrivals," remarked Pickersgill.

The minister also noted that, over the years, government has not done enough by way of educating the public about climate change and its effects on the country. However, according to him, changes are coming as he is hoping to engage in a joint programme with the Ministry of Education.

The four-day conference, which opened on Monday, will seek to, among other things, foster dialogue and exchange of experiences between the EU and developing countries on climate policy, and on practical approaches to integrate climate change into development policies and budgets.