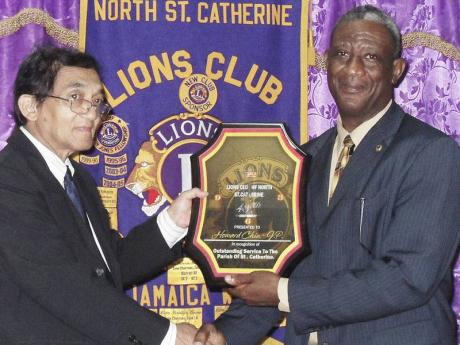 PRESIDENT OF the Jamaica Baptist Union, the Reverend Luke Shaw, has called for a renewal of the spirit of volunteerism across communities in Jamaica.

"Volunteerism is something that is fast disappearing from our midst, you don't give unless you get something, and for many persons and many organisations today, if they are not in the limelight when they serve, they will not offer help," he told his audience.

He was delivering the keynote address at the 43rd anniversary dinner of the Lions Club of North St Catherine at the Lions Civic Centre in Bog Walk recently.

It was against this background, that the clergyman congratulated the organisation for its contribution to community development and nation building, during its existence.

"I want to congratulate you for being part of a community of 1.35 million volunteers in over 205 countries and 46,000 clubs all over the world in different regions. We recognise the work of the Lions in health, in environment, in education, in the social and economic empowerment," noted Shaw.

At the same time, he implored members of the Lions Club to focus on the country's youth population, as they continue to extend their services to satisfy the needs of the vulnerable.

"Half of Jamaica's population is youth, 53 per cent. Pay attention to the youth. There are many things our youths need to learn ... if we don't pay attention to them, we are going to be heading for some serious problems in Jamaica," he said, citing the need to address education, health, peace and conflict resolution.

He called on the service club to initiate partnerships with churches and other organisations to establish conflict and dispute resolution centres to address some of the needs of our country's young people.

Meanwhile, Howard Chin, Justice of the Peace (JP), was honoured for outstanding service to Ewarton, his hometown. The St Jago High alumnus who worked at Alcan Jamaica Limited for 10 years has been a JP since December 1992.

In his response, Chin said he was elated to be recognised. He noted that his demonstration of his love for people has brought him many happy returns.

The 67-year-old has been integrally involved in community activities, serving as president of the Ewarton Youth Club. He also initiated the Ewarton Consultative Committee and served as president, during the tenure of now retired custos of St Catherine, Gladstone Lewars.