$120m for bypass project could be repaid 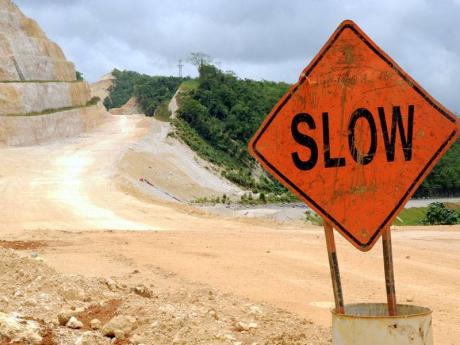 In this 2009 file photo, a sign directs drivers as construction takes place on the Mount Rosser leg of Highway 2000.File

THE US$120 million spent by the Government on the Mount Rosser bypass project, which was stalled due to geotechnical problems, could be repaid under a proposed contractual arrangement between the State and China Harbour Engineering Company (CHEC) Limited.

Anderson appeared before Parliament Public Administration and Appropriations Committee (PAAC) and gave an update on plans by NROCC and CHEC to negotiate a deal to construct the remainder of the north-south link of Highway 2000.

The matter was considered by Cabinet last week.

The basis for the project

The NROCC boss divulged that the agency has now received a final geotechnical report, which was completed in January. He said this report would form the basis for any implementation of the controversial Mount Rosser bypass project.

"It does not involve a realignment of the road around the area; it's actually in the same location, but all we are doing is to separate the carriageways," Anderson explained.

A stalemate developed between the then administration and Bouygues after geotechnical problems were discovered along a 650-metre stretch within zone two of the Mount Rosser project.

Anderson told the committee that NROCC had received legal advice, which indicated that Bouygues was fully responsible for the problems which arose on Mount Rosser.

The French company and NROCC had reached an agreement to break the deadlock.

He said the then arrangement was for Bouygues to fund 66 per cent of the cost while NROCC would finance 34 per cent.

"In the event that everything fell through, this is the basis of the agreement that we now have with Bouygues," Anderson noted.

The original cost of the bypass project was US$99 million, but a variation pushed up the sum to US$120 million.