National U16 coach believes netballers gained much from English tour 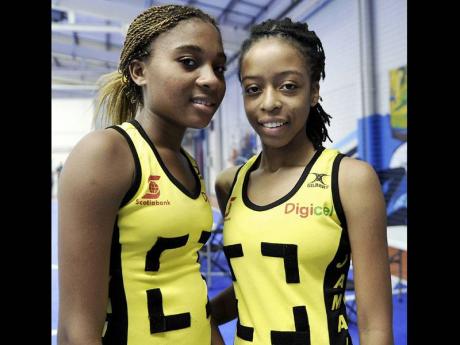 Jamaica's Under-16 netball captain Imani Smalling (right) and Caralee Tingling pose after the team's 34-26 win over Birmingham's Under-16 team during their match at the Birmingham Futsal Arena in Birmingham, England. Jamaica swept the series 3-0. - Contributed

The Jamaicans, who skipped the Caribbean Junior Championships for the tour of England, recorded a 3-0 series victory over their Birmingham counterparts.

Reynolds told The Gleaner the girls improved a lot on their individual skills during the tour.

"They are expected to make the transition and that is why we participated in this tournament, because the next step for them is the Under-21 programme and also to the senior national team," said Reynolds.

"I believe that this experience is a great platform for which they can build on for the next level of their development in the sport," he added.

Reynolds stated that she was also impressed with the team's performance during the series, as they played well despite the cold conditions in England.

"It was a great experience for our girls during the tour of England because they really played well throughout the entire series," Reynolds said.

"All our main objectives were also achieved because we defeated the Birmingham Under-16 team 3-0 and we are very happy for that," she said.

However, Reynolds despite the 3-0 whitewash of their Birmingham counterparts, there is still some amount of work to be done in the defensive area, as this was their major downfall when they were beaten 36-22 by the England Under-17 team in their final match of the tour.

"I think we need to work mostly on our defensive movements and getting the ball to move from defence to attack very smoothly," Reynolds said.

"However, I think the girls played well in that game because the England Under-17 team was a lot more mature and more advanced than us."

Meanwhile Imani Smalling, captain of the Jamaica Under-16s, said the team did well.

"I believe that we did excellently," said Smalling. "We really excelled in the colds conditions over there, because we were mentally and physically prepared for it, and so we just went out and executed as we were told to do by our coaches," she said.

"I believe that this experience will broaden the girls' horizons because we have made a lot of new friends and we have also learnt how to appreciate another culture," Smalling added.