I am the underdog, but I will show them - Skeen 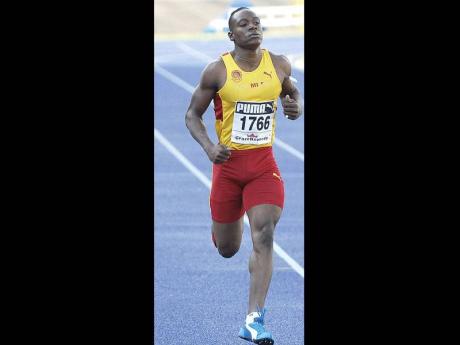 Odean Skeen talks a tough talk, having experienced both ends of the spectrum.

In the misery of an injury-ravaged season, Jamaica's first ever 100m Youth Olympic champion now knows he is an underdog.

It's a tag the 18-year-old is comfortable with, and despite the pressure of expectation and a string of unfortunate events, Skeen has made it quite clear that the voices of discontent have not bothered his confidence.

"Pressure doesn't bother me one bit," Skeen underlined during a recent interview with The Gleaner. "I know my name isn't the name that the fans are shouting right now, but I am fine with that. I am always the underdog, but that is ok, I will come out on top in the end.

"In 2010 I was up and in 2011 I was down and this year I would say I am half-way there, but come Junior Trials I will surely be on top, me the underdog," Skeen said in reference to June's Jamaica Athletics Administrative Assoc-iation (JAAA)/Supreme Ventures National Junior Championships.

It is a trial that will be used to select Jamaica's team to the IAAF World Junior Championships in Barcelona, Spain.

Having lived his best moments on the track in 2010; winning the inaugural 100m Youth Olympic title in Singapore after victories at the Inter-Secondary Schools Sports Association (ISSA)/GraceKennedy Boys and Girls' Athletics Championships and the Carifta Games, Skeen saw his fortunes reversed a year later.

The Wolmer's Boys' student, hampered by injuries to his groin and hamstring, was unable to achieve similar success - his withdrawal from the 100m at the IAAF World Youth Championships in Lille and a subsequent false start in the 200m brought the curtains down on a terrible year.

Things seemed to be heading in the right direction at Champs this year, but another false start - this time in the Class One boys' 100m final - and failure to qualify for the final of the 200m after seemingly running out of steam, suggested that Skeen's road to redemption has yet a few more corners to navigate.

"I didn't do much at Champs, there was something wrong with the gun and the start (100m), but God has a plan for me and I am not worrying too much about that right now because it is in the past. The World Juniors is coming up and that is what I am focusing on," said Skeen.

An impressive 10.33 personal best run at the University of Technology Track and Field Classics inside the National Stadium a fortnight ago was a clear indication that the young speedster was once again ready to upstage his rivals, and critics.

His best is yet to come and with 10.20 or lower now in his crosshairs, Skeen is looking to once again establish himself as the island's most promising junior talent.

"My aim this year is to beat the 10.20 barrier. I need to keep working on the start, I know I have a wonderful finish, but I know that if I work on the start I will be able to beat that 10.20 barrier sooner or later," Skeen shared.

The youngster is expected to be a part of the Wolmer's team to the Penn Relays later this week.