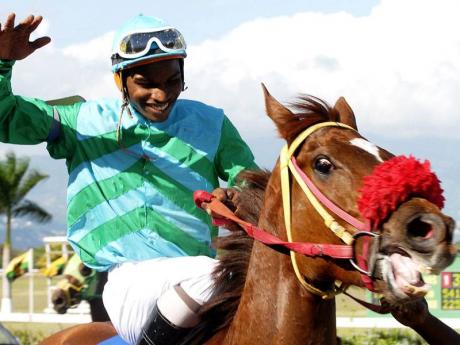 Trained by Howard Jaghai, GOLDEN IMAGE was highly fancied to win the Jockeys' Guild of Jamaica Trophy over 1400 metres when last raced on March 31, but found SHYANA too strong and finished 3 1/4 lengths second, a length ahead of the late-closing ANNTRACK with SERIOUS BUSINESS another 2 3/4 lengths fourth.

She renews rivalry with the Wayne Parchment-trained ANNTRACK on 3.0kg better terms and even with an additional 100 metres to travel, should hold her at bay once again.

The same is true of SERIOUS BUSINESS, who renews rivalry on the same terms (54.0kg each) at the weights.

Having secured a favourable draw on the outside of the field, GOLDEN IMAGE will not be easily denied, with four-time champion jockey Omar Walker replacing Shane Ellis, who is sitting out a two-day suspension.

The four-year-old filly by Image Maker out of L.S.C. Choice has looked fluent at exercise in her preparation for this race, galloping five furlongs in 1:03.2 easily last Wednesday morning.

GOLDEN IMAGE has shown good pace in her races and given an Omar Walker ride, should hold ANNTRACK and SERIOUS BUSINESS at bay in the final rush.

Being a Hit-6 race, others to look at are WAR HERO, PRINCECHAD and topweight JAGSOVER under champion jockey Dick Cardenas.

Elsewhere on the nine-race programme, a field of classic-bound three-year-olds take the field in the eighth race (restricted allowance two) over 1820 metres, and it promises to be an interesting event among the nine starters.

The field includes the 2000 Guineas third AVENTURA, to be ridden by Paul 'Country' Francis, LASHING FORCE, RAGING PROSPECT, late-kicking SIRMANDI and the unbeaten colt, POWER BY LIGHT, who made an auspicious debut over 1100 metres in maiden company on April 9.

While the Gresford Smith-trained AVENTURA represents classic form and Anthony Nunes' SIRMANDI is being touted as an up-and-coming Derby horse, the Wayne DaCosta-trained POWER BY LIGHT has worked so well since his fast time (1:07.0) win when sprinting that he looks a really smart cookie.

Although having to carry 2.0kg overweight for the services of leading jockey Dane Nelson, the son of Alex-Miss Tassy should prove too strong for AVENTURA and SIRMANDI with only 52.0kg.

I also like DaCosta's unbeaten American 3-y-o filly HUPOMONE to romp the first race, SURREAL to catch SHYANA in the second and THE RUNNING MAN over LATENT POWER in the sixth.