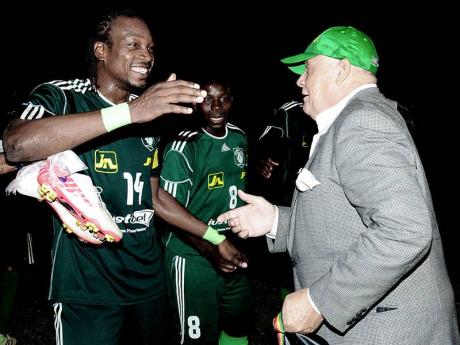 The improbable moved closer to probable on Monday night as Red Stripe Premier League (RSPL) leaders Portmore United allowed another excellent opportunity of claiming the title slip, as they were humbled 3-0 on home soil by Humble Lion.

Boys' Town, who sit second in the league with 60 points, now have a more realistic chance of catching the leaders and bettering them as they are now just six points behind Portmore United.

The Red Brigade could pile even more pressure on Portmore United by beating them when they meet next Sunday, and send the title race down to the wire.

Wolry Wolfe, a former Portmore United player, struck a delightful double in the 70th and 90th minutes to sink his former team and give Boys' Town renewed hope.

Captain Omando McLoud scored the other goal for the Clarendon-based team and forced Portmore United to keep the champagne on ice and put their plans for celebrations on hold.

"It is a tough loss, losing 3-0 at home, but we have to bounce back from this. We are going through a terrible time right now. We have not won in the last four games, but we go to Boys' Town still optimistic and positive as to what we are going to do," a beaten, but defiant Calvin Lewis, coach of Portmore United, said at the end of the game.

Entering the game needing just a point to win the title with three more sets of games to play, the leaders dropped all three points and continued a run of less than favourable results, having not won in their last four games, with nerves seeming to get the better of them as they near the finish line.

"I think the turnovers were a problem. There were too many turnovers in the middle of the park and we continued to turn the ball over. The decision-making in front of the goal was not good tonight," Lewis said, explaining his team's below-par performance.

"I think there was a lot of pressure on the players. They wanted to get over with it as early as possible and were not composed. Humble Lion were very comfortable, they were much more composed than us," he added.

Humble Lion's Lenworth Hyde Sr said two losses against Portmore earlier in the season was the motivation for his team's performance.

"We lost to Portmore on two other occasions this season so we were hell-bent on not losing the third.

"It is tough in the competition for a team to beat you three times if you are a quality team, and the training this week was focused on that. It has been a while since we have scored three goals in a game so we were working in front of the goal this week doing some attacking moves and it showed today. We taught the players to be composed and to enjoy the game, there was no pressure on us, so just go out there and enjoy the game. That was the plan for this game," explained the man who has the distinction of leading Harbour View, Tivoli Gardens and Portmore United to Premier League titles.

While others would have been spurred on by the opportunity to show their former employers that they were wrong to let them go, Hyde said that was not a factor.

'Not a grudge match'

"It was not a grudge match and it wasn't like that. We just wanted to come out and perform, and when you are relaxed you always play better, and I think we were relaxed today," he explained.

He was also full of praise for his substitutes, double goalscorer Wolfe and debutant goalkeeper Peter Harrison.

"The changes that came in made a difference also. Lenny Hyde Jr came in and did well, Jermaine Christian came in and did well also, and I think that lifted the spirit of the team, and I must lift my hat to Wolfe. He is a stalwart in this team and he is a player who loves the football and is always turning up for the game, so I must lift my hat to him.

"The defensive unit played well and it was the first time that we were using that goalkeeper, Peter Harrison from Waterford. We are not afraid of trying new players," stated the satisfied Hyde.