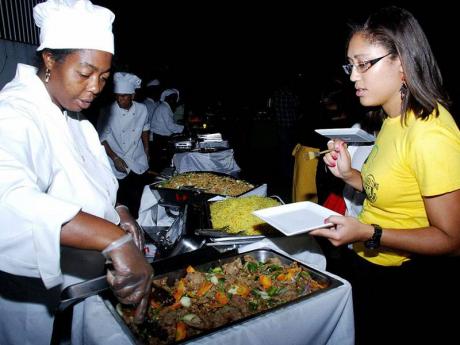 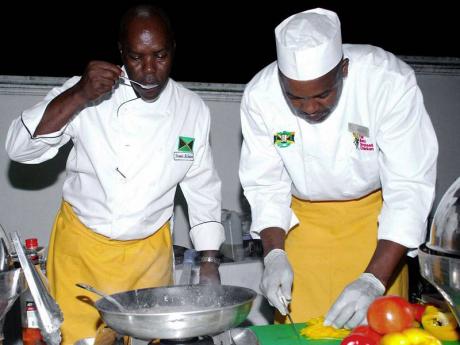 Executive chef for the Cardiff Hall Hotel & Spa, Dennis McIntosh (left), tastes the sauce to be added to the skewered jumbo shrimp. Preparing the vegetables is Shawn Dobson at the Jamaica Epicurean Escape on Monday, April 23.
1
2

Guests on the lawns at 19 Carmel Road got their first chance to experience the tastes of 'Jamaica Epicurean Escape' (JEE) where several of Jamaica's top chefs showcased their culinary skills providing a tantalising taste of what the three-day international food festival will be.

Slated to be held in late November, the festival will provide a wide array of delicious, mouth-watering gourmet dishes by top-ranked chefs such as Brian Lumley, George Matthews, Gariel Ferguson, Dennis McIntosh, Theo Smith, Colin Hylton, Ashton Janke and Lorraine Fung. Members of corporate Jamaica and industry insiders had their taste buds awakened as Marcia McDonnough, team leader and managing director of Touchstone Productions, explained the concept of this three-day festival. She noted that although Jamaica is known for its delectable cuisine, there is currently the absence of a sophisticated, international food festival such as the Aspen Food Festival or South Beach Food and Wine, just to name a few.

With this year being Jamaica's 50th year of Independence, she felt that it was time to stage a world-class food event. Through the introduction of the JEE, "the global reputation that Jamaica enjoys for having some of the tastiest indigenous food, complemented by our own appreciation for all types of international cuisine", stated McDonnough, will come to the fore.

McDonnough added that the festival would bring together the best of everything local and international in the food industry from chefs to restaurants, etc. She went on to state that plans also included cafés and lounges sprawled across the festival grounds, with the main attraction being a grand tasting tent. "As a family event, it will provide a fully manned children's zone that will offer them interesting edutainment while giving parents the chance to participate with their children or just to enjoy the offerings, ending with top-class entertainment acts," she emphasised. Also present at the event was Dr Carolyn Hayle, executive director of the HEART/NTA, who spoke of the direct effect that such a festival will have on the culinary arts in the tourism sector in Jamaica.

The proposed venue for the festival is the Richmond Estate in Priory, St Ann, strategically located between Kingston and Montego Bay, due to the access to a number of hotels on the north coast as well as the beautiful and spacious grounds to house the thousands of patrons that are expected. The JEE event has been endorsed by the Jamaica Tourist Board as one of the celebratory events for Jamaica's 50th anniversary.