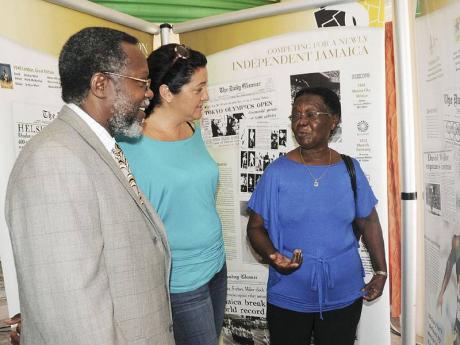 In the land of sprint legends Merlene Joyce Ottey and Arthur Wint, The Gleaner Company launched its archival exhibition titled 'The Journey of Champions: 50 Years of Jamaican Athletic Excellence' at the Hanover Parish Library in Lucea yesterday.

Byron Buckley, The Gleaner's associate editor - special projects, said the Hanover leg is the fourth of six exhibitions to be mounted across the island in conjunction with the Jamaica Library Service and Scotiabank Jamaica.

"We have chosen to showcase material from The Gleaner's extensive archive about Jamaica's rich athletics history because this is the year of the London Olympics," Buckley said. "We hope, through this roving exhibition, to bring one of Jamaica's most important and inspiring post-Independence stories to people of all ages islandwide. Particularly, we want young people to be aware of the past, who inspired our athletes of today and why."

The exhibition, which documents and highlights some of Jamaica's sports legends, including Wint and Ottey, over the past 50 years, is sponsored by Scotiabank Jamaica and was officially declared open by Custos of Hanover Dr David Stair, who urged that coaches and sports administrators should not be forgotten as the exploits of athletes are highlighted and celebrated.

Merlene Ottey's mother, Joan Bowen Ottey, who was in attendance, said the exhibition could serve as a strong motivating factor for young people.

"It's a good exhibition and it's really inspiring for younger ones coming up. And I hope that they will all come and take a look at it. Perseverance, strength and dedication are all featured here," she said.

Kelonie Noble, librarian for the Children's Division at the Hanover Parish Library, read an excerpt from the book The Longer Run - A Daughter's Story of Arthur Wint written by Valrie Wint, which chronicles her father's life and times as he lived and worked in Hanover. The book paints a riveting picture of the man behind the legendary athlete, who was from Manchester.

The exhibition will be hosted at the Hanover Parish Library for two weeks.