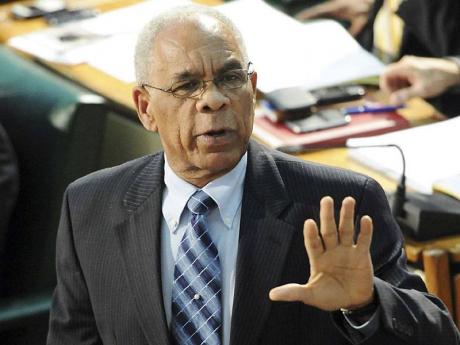 THE GOVERNMENT is to continue three major projects that were commenced by the previous administration.

Dr Omar Davies, the transport, works and housing minister, on Tuesday told Parliament that the projects, which involve major infrastructure works, are critical to the country's future development.

The projects are the completion of the north-south link of Highway 2000, the Gordon Cay Container Transhipment hub and the Fort Augusta Container terminal.

"Unless we are willing to continue with a long period of economic stagnation, we have no option but to attempt to maximise the level of private investment," Davies said.

He said the projects were considered to be of strategic importance to the development of the Jamaican economy, especially after the opening of the widened Panama Canal in 2012.

In making the announcement in Parliament, Davies said the investments have been proposed within a strategic investment window.

He said, however, that, "there are significant risks that if the private intention of these investors were subjected to open competitive tender, the investment would have been lost to rival destinations, which are clamouring for similar capital investment, especially in port development."

The minister said the risk of losing the investment, coupled with the need to ensure that works commence in a time to meet the completion of the expanded Panama Canal in 2014, were factors which informed the Cabinet decision.

In the case of the north-south link for Highway 2000, the Cabinet decision will see China Harbour Engineering Company (CHEC) partnering with the National Road Operating and Construction Company (NROCC) for the implementation of the toll road.

NROCC was forced to suspend the negotiations last year after the Office of the Contractor General raised concerns about the absence of competitive tender for the arrangement.

In the meantime, the Gordon Cay Container Transhipment hub project represents a proposal from CMA CGM Group of France to substantially renovate an existing section of the Gordon Cay to accommodate transhipment cargo.

CHEC has also approached the Port Authority of Jamaica to establish a new container terminal on lands owned by the authority at Fort Augusta.

Davies said although a non-binding agreement has been entered into between CHEC and the authority, the Government has not entered into any contractual arrangement. He said, as in the case with the Gordon Cay project, the memorandum of understanding will allow for a feasibility study to be conducted on the project.