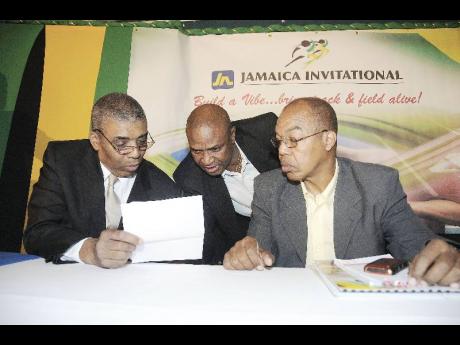 As the days wind down to next week Saturday's JN Jamaica International Invitational IAAF World Challenge meet inside the National Stadium, organisers continue to add some of the world's best talents to the roster, having confirmed seven reigning Olympic champions and six current world champions to date.

Recognised as the first major track and field meet on the international calendar, the JN Jamaica Invitational has been attracting the sport's best, and with Usain Bolt, Asafa Powell, Yohan Blake, Carmelita Jeter, Shelly-Ann Fraser-Pryce and Melaine Walker already confirmed, organisers yesterday reeled out several other big names ahead of what is expected to be another spectacle.

World 100m champion Blake and former world record holder over 100m, Powell, will square off in the 200m. Blake has a personal best time of 19.26 - the second-fastest in history.

Fast-rising Racers sprinter Warren Weir and World Championships finalist Nickel Ashmeade will also to add to the excitement in the event.

Jamaica Athletics Administrative Association official Ludlow Watts, at a press conference at the Wyndham Hotel yesterday, spoke to the international appeal of the meet, which is entering its ninth year.

"International broadcasters IEC will televise the meet to several countries in the world in parts of Europe, Asia, Africa and the Middle East. The meet will be under the watchful eyes of the IAAF and we will provide a grand performance, as we have in the past," said Watts.

JN's assistant general manager, group marketing, sales and promotion, Leon Mitchell, says he is expecting the meet to continue on its path to growth.

"We recognise the tremendous gains that have been made in the hosting of this event and we anticipate that even greater success will be achieved in the future," said Mitchell.

Bershawn Jackson, Leford Green, Josef Robertson, Isa Phillips and Danny McFarlane will contest the 400m hurdles, but it's the men's shot put that boasts the strongest field, with five of the top 10 throwers in the world already confirmed, with Olympic silver medallist Christian Cantwell leading the charge.

Fraser-Pryce will be joined in the 200m by Anneisha McLaughlin, Shalonda Solomon (USA), and 400m specialist Shericka Williams.

Brigitte Foster-Hylton will run in the 100m hurdles, with Brittany Reese headlining the long jump.

Seventeen international events will be contested, with the marquee portion of the meet starting at 7 p.m. Tickets will cost $500, $1,500, $2,000 and $2,500, and will be sold at Wyndham, York Pharmacy, National Stadium ticket office, and several JNBS locations.