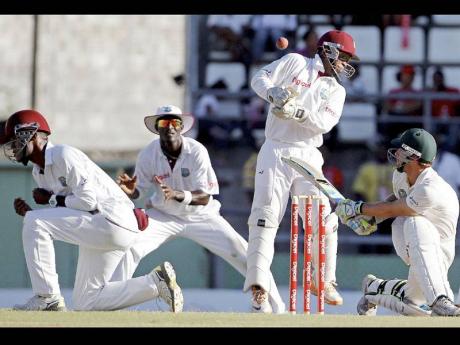 West Indies hit back in the last session yesterday with key wickets, but Australia extended their lead significantly to leave the hosts with an enormous task of winning the third and final Test.

At the close of the third day at Windsor Park, Australia were 200 for six - a lead of 310 runs with two days left in the contest.

Left-hander Mike Hussey was unbeaten on 17 and was accompanied by Ryan Harris on four.

Former skipper Ricky Ponting, in surely his last innings on Caribbean soil, top-scored with 57, while opener Ed Cowan got 55.

However, off-spinners Narsingh Deonarine (2-28) and Shane Shillingford (2-69), along with fast bowler Kemar Roach (2-40), all picked up two wickets apiece to limit the damage.

Earlier, West Indies conceded a first-innings lead of 110 runs after being dismissed for 218, about 25 minutes before the scheduled lunch break.

Ageless left-hander Shiv Chanderpaul marched to his 58th Test half-century and to within 14 of 10,000 career runs when he stroked a top score of 68.

Starting the day on 165 for eight, West Indies progressed well as Chanderpaul and Ravi Rampaul (31) extended their overnight ninth-wicket stand to 66 before being separated.

Chanderpaul held the innings together after resuming from his overnight 34, before being last out in what was another tremendous effort by the veteran campaigner. He faced 164 balls and struck three fours.

Rampaul continued to play his shots, but played one too many when he attempted to hoist off-spinner Nathan Lyon (4-69) and got a leading edge to David Warner at point. He hit five fours and faced 50 balls.

Chanderpaul found a worthy ally in Kemar Roach (nine not out) to add a further 32 for the last wicket and frustrate the Aussies.

He reached his half-century with a single to cover off seamer Ben Hilfenhaus, but became left-arm pacer Mitchell Starc's second wicket when he was plumb lbw to one that swung.