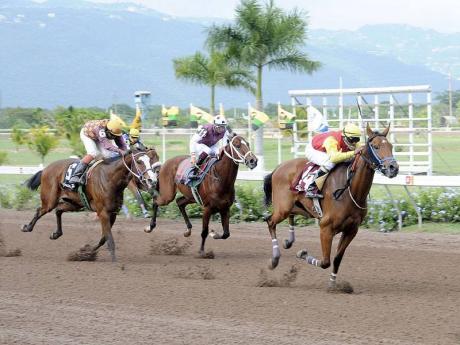 PRINCECHAD, running without the visor and figure eight on this occasion, scored a mild upset in yesterday's 4-y-o and up feature race for the Joshua Morrison Memorial Cup at Caymanas Park, winning quite convincingly.

Ridden by 2.0kg claiming apprentice Robert Halledeen for owner/trainer Edward Walker, PRINCECHAD ran through early in the straight to win by three lengths from the fast-finishing ANNTRACK, the 2-1 second favourite in a field of 15.

The rank outsider NATURALFANTASY was third, with JAGSOVER, owned by former West Indies fast bowler Courtney Walsh (who was present at the track), placing fourth.

Big disappointment was the performance of the 6-5 favourite GOLDEN IMAGE, who raced in touch to have every chance approaching the distance, but flattened out in the closing stages to finish 10th.

Never far off the pace as NEVER GIVE UP and the well-backed SERIOUS BUSINESS alternated in the lead, PRINCECHAD was produced entering the straight. He disposed of the leaders approaching the distance to win by two lengths from the late-running ANNTRACK (2-1), who found himself outpaced into the straight.

A 4-y-o bay gelding by Storm Craft out of Borcellino, PRINCE-CHAD was notching his second win from 32 career starts.

Earlier in the afternoon, the 2000 Guineas third-place finisher, AVENTURA (2-1), outfinished RAGING PROSPECT (9-1) by 11/2 lengths to win the restricted allowance two race over 1820 metres and remain a contender for the upcoming Lotto Classic (Governor's Cup) and the Derby in June.

Held off the early pace in fifth for the first half of the race as LASHING FORCE (13-1) opened up a commanding lead over TOURING WITH RHEA and 4-5 favourite POWER BY LIGHT at the halfway stage, AVENTURA and RAGING PROSPECT closed in as a team on the leader approaching the final bend, with the Gresford Smith-trained AVENTURA (Paul Francis up) gaining the ascendancy a furlong out to win by 11/2 lengths.

AWESOME MARQUE (3-1, Oneil Mullings up) was disqualified after passing the post first in the fourth race, this for causing interference to the third horse, GHOST RAPPER, at the half-mile and the race awarded to 3-1 favourite MOJITO JAM.

Dane Nelson rode two winners on the card to lead the standings with 44 wins.