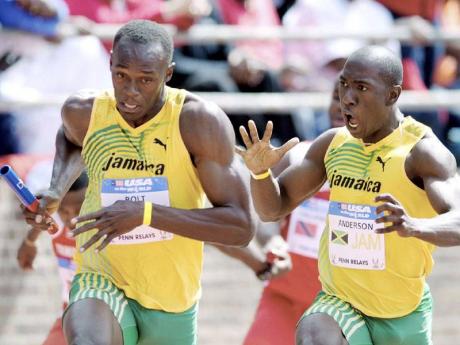 Jamaica's Usain Bolt (left) powering away on the anchor leg after receiving the baton from Jamaica Gold teammate Marvin Anderson in the USA versus the World 4x100 metres at the Penn Relays last year. Bolt's Gold team clocked a meet record 37.90 seconds. - AP

As ever, the focus at the world-famous Penn Relays is mainly on our high-school teams. Among them, Calabar and Edwin Allen will be seeking to crown Champs winning seasons.

At Champs, Calabar crowned a famous win with a fine run in the 4x400-metre relay. Carlton Cousins, Michael O'hara, Fabian Loathers and Javon Francis combined to clock three minutes, 10.19 seconds, the third-fastest ever at Champs.

That came after all the rigours and rounds of individual events. If they are fresh, they could become the second Calabar team to break 3.10 following the 1990 squad that included Daniel England.

Munro are the defending 4x400 champions, but there are contenders from outside of Jamaica. Boys and Girls High School of Brooklyn were in fine form indoors, with times of three minutes 15.12 seconds and seven minutes, 41.10 seconds for the 4x400 and 4x800-metre relays, respectively. The Lodge School of Barbados might be a factor, too, based on its best 2012 time of three minutes, 13.94 seconds.

Edwin Allen have run the 4x100 metres in 45.00 and 45.28 seconds, respectively, with two completely different quartets. Even if World youth bronze medallist Christania Williams is unavailable after the injury she incurred winning the Class Two 100 at Champs, the light blues certainly have the ammunition to break 45. If she is fit, Edwin Allen might have the Penn Relay record - 44.32 from 2004 by Vere Technical High School - in their sights.

For all that, high-school events are slightly less important in Olympic year. Ranked more highly are the stars who will run for Jamaica in the USA versus the World series.

Jamaica have won the men's 4x100 in three of the last four renewals. After the UTech Classic, another win seems possible. Racers clocked a world-leading time of 37.82 seconds with Mario Forsythe, Yohan Blake, Kimmari Roache and Usain Bolt supplying the speed. Add MVP standouts Asafa Powell, Nesta Carter and Michael Frater, and you have a Jamaica squad that is more than capable. However, early news from Penn only confirmed the presence of Carter.

Fresh from a wind-aided 9.85 second 100-metre run last weekend, Olympic and World bronze medallist, Walter Dix, is the best of the Americans. He and World Indoor champion, Justin Gatlin, should be the core of a strong USA team, but it's hard to see them winning if the Jamaica team is near full strength.

Our ladies haven't won the Penn 4x100 since 2004 and lost to the Americans in Daegu last year and may well be without Veronica Campbell-Brown (VCB) and Sherone Simpson. VCB seldom comes to Penn and Simpson stopped at the UTech Classic with leg stiffness.

Between the locally based MVP, Racers, Sprint Tech and Swept Track clubs, and US-based Leford Green, there probably is a men's 4x400 team capable of running faster than three minutes and 02 seconds.

Shericka Williams and Novlene Williams-Mills lead the Jamaica charge in the women's 4x400. It would be great if in-form Rosemarie Whyte was on duty as well. Early information says that the USA have assembled a full strength squad with Felix, Sanya Richards-Ross and Francena McCorory in the mix.

Kenia Sinclair should also be there, with her customary anchor leg in the sprint medley. In the last four years, she has sealed Jamaican victories in this event.

High school athletics fans will have fun. Beyond that, the Penn Relays will give us a glimpse of London as Jamaica faces the USA for the first time in 2012. With the Games not far off, this look at Jamaica's Olympic relay power could be worth its weight in gold.