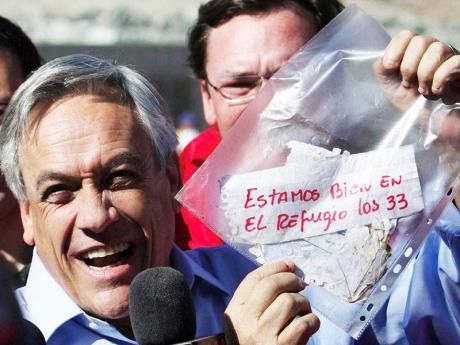 Chile's President Sebastian Piñera is seen here at a mining site in Copiapo, Chile, on August 22, 2010, reacting to news that 33 trapped miners were alive after being buried by falling rock three weeks earlier on August 5. - File 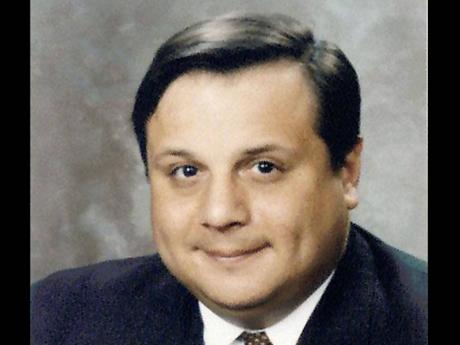 The pace of seismic activity has been on the rise along much of the Pacific belt as the tectonic plates accelerate their process of constant realignment.

Along with Indonesia, Peru and Japan, Chile witnessed a number of major incidents. Last week, a 6.7 earthquake on the Richter scale rocked Valparaiso, sending people running for cover. Fortunately, there were no casualties and very little damage.

Nevertheless, small quakes in the middle of the night are the main source of excitement in ho-hum Chile. The economy is doing fine, and the political situation is quiet. But, like a major earthquake that sits somewhere on the horizon, tensions are building below the Chilean economic and social surfaces.

At first glance, things look fine. The Chilean economy expanded 4.5 per cent y/y during the fourth quarter of last year, and it is on track to grow about five per cent y/y this year.

Despite the softening of some commodities, copper prices remain strong. Low inventory levels are the main reason for the robust performance of the copper market.

Production disruptions in Peru, heavy rains in Chile and delays across several new African mining concessions led to a decline in global output and inventories. To make matters worse, the Chilean state-owned mining giant, CODELCO, was forced to purchase copper on the spot market several times over the past year in order to meet delivery obligations - thus pushing prices higher.

Several of the county's more important mines are being depleted, and there has not been sufficient investment made on exploration to find new deposits. Corporate mining chiefs are in a difficult situation.

They see the looming slowdown in China and are reluctant to expand output. Yet, prices remain firm for technical reasons, thus allowing the Chilean economy to roar ahead.

Yet, the economy is facing serious inflationary pressures. The heady pace of economic activity is the reason why Chile's inflation rate remains so stubbornly high. At the beginning of April, the central bank raised the country's annual inflation target to 3.5 per cent y/y from the 2.7 per cent mark that was set at the end of last year.

Unfortunately, consumer prices rose 3.8 per cent during the first quarter. This forced the central bank to keep interest rates at five per cent, and there are some economists that are expecting the monetary authorities to raise interest rates further.

Not surprisingly, the Chilean peso remains incredibly strong - bouncing in a range of 480 to 490. The combination of high inflation and an overvalued currency are making Chile one of the more expensive destinations in Latin America. The exchange rate is also becoming a threat to the economy, as exporters lose competitiveness.

Exports dropped 5.5 per cent y/y in March. Copper revenue tumbled 16.1 per cent, mainly due to production problems. The massive real appreciation of the currency is, yet, another disincentive against making additional investments in copper exploration and production.

Although Chile made enormous progress in diversifying its economy during the 1980s and 1990s, by moving into sectors such as wines, forestry, agriculture and salmon farming, the spike in copper prices raised the relative importance of the copper sector to dangerous levels. It is also leading to an enormous concentration of wealth.

Individual families directly or indirectly associated with the mining industry have accumulated prodigious levels of wealth, thus widening the income gap. More than 30 family offices represent the 100 or so families that control most of the country's assets.

Ostentatious displays of wealth only add to the simmering discontent. This is why the country occasionally explodes in spasms of social unrest.

To the untrained eye, it seems like a contradiction in terms. How can such a prosperous country be gripped by episodes of fiery riots? The answer is that the affluent neighbourhoods of Vitacura, Providencia and La Dehesa, where most investors stay and hold their meetings, is not representative of the rest of the country.

Unfortunately, President Sebastian Piñera hails from the rarefied elite, and he has failed to connect with a large part of the electorate. Although he started his presidency with the miraculous rescue of the trapped miners, his popularity has been slipping ever since. He has shown an enormous capability to manage difficult situations, such as earthquake responses and mining rescue operations, but he has been incapable of communicating with the masses. Therefore, Chile may be doing well as long as copper prices are high, but it will face a very hard time if the red metal begins to follow the trend that is starting to build across the wider field of other commodities.