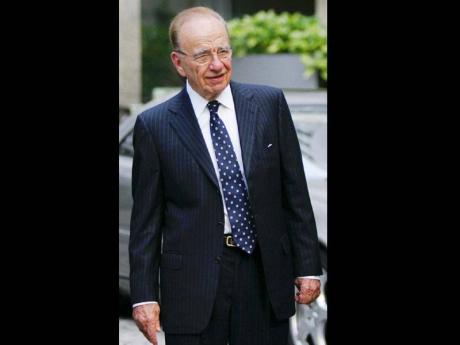 News Corp chief Rupert Murdoch said Thursday that he panicked when he closed the News of the World tabloid last year, one of a series of revealing exchanges made at an inquiry into British media ethics.

The 81-year-old media magnate acknowledged that the scandal which erupted at the Sunday tabloid last July was a "serious blot" on his reputation, but claimed his company was drawing a line under the sordid episode.

Murdoch was testifying for a second day at an inquiry run by Lord Justice Brian Leveson, a hotly anticipated appearance which has so far seen the media mogul meet pointed questions about his nexus of political influence and business interests with a wall of denials.

Murdoch largely stuck to the same script Thursday, but a few new revelations tumbled out - along with a strikingly personal admission that he didn't do enough to nip the scandal in the bud.

"I failed," Murdoch said at one point. "And I'm sorry about it."

Pressed on why he closed the News of the World at the height of the scandal, Murdoch said it was an impulse move.

Murdoch also revealed that he was shocked by the size of the 2008 payout made to one of the very first victims of phone hacking to sue News International - testimony at odds with what his son James told the inquiry earlier in the week.

The younger Murdoch said that at the time he had no way of knowing whether the sum was particularly large.

But the elder Murdoch expressed no such doubts.

His admission was important because critics have pointed to the size of the US$1-million settlement - 10 to 20 times larger than a typical payout for breach of privacy - was intended to keep a lid on the scandal.

If James Murdoch knew that the settlement was unusually large when they signed off on it, it would strengthen the argument that he knew that the payout was aimed at hiding wrongdoing.

Overall, Murdoch stuck to the line that he and his son were deliberately kept in the dark about illegal behaviour at the News of the World.

"The senior executives were all misinformed, and shielded from anything that was going on there," he told the inquiry. "I do blame one or two people for that."

He didn't name them, but in suggestive comments he identified one of those people as "a clever lawyer" who shared drinks with many of the journalists involved.

The former senior legal officer at the News of the World was Tom Crone, who stepped down within days of the scandal's eruption. His phone rang unanswered Thursday.

Various attempts to reach Crone over the past year have been unsuccessful. The lawyer has previously challenged aspects of James Murdoch's testimony.