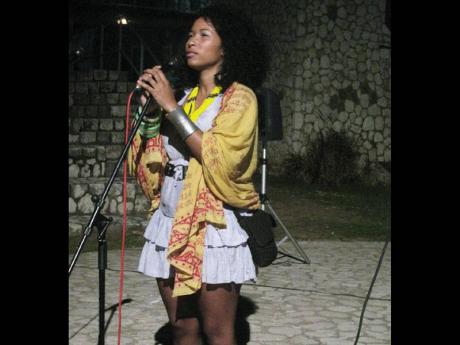 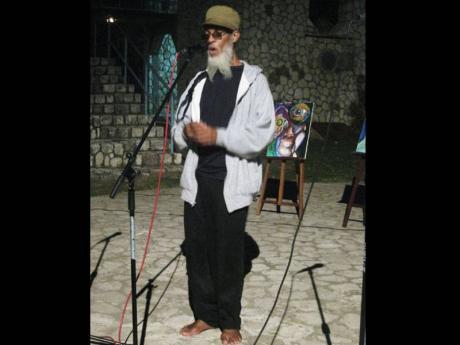 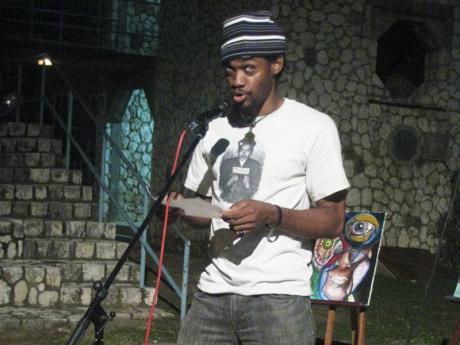 Dingo delivers one of his usually entertaining performances. 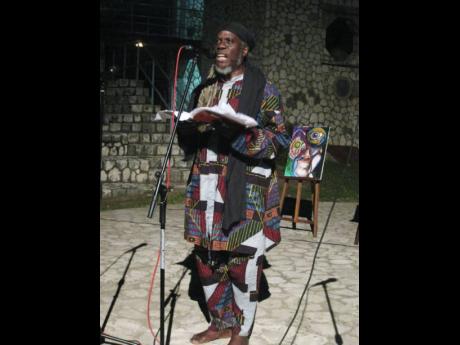 Mutabaruka performs at the Poetry Society of Jamaica's April 2012 fellowship, held at the Edna Manley College of the Visual and Performing Arts, 1 Arthur Wint Drive, St Andrew, on Tuesday. - photos by Mel Cooke 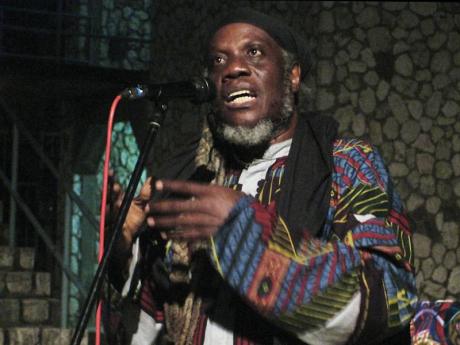 Mutabaruka performs at the Poetry Society of Jamaica's April 2012 fellowship, held at the Edna Manley College of the Visual and Performing Arts, 1 Arthur Wint Drive, St Andrew, on Tuesday. - photos by Mel Cooke
1
2
3
4
5

Close to the end of his presentation at the Drama School Amphitheatre, Edna Manley College of the Visual and Performing Arts, on Tuesday night, poet Mutabaruka literally and dramatically dared the biblical deity at length before his closing 'Dis Poem'.

"If there is a God with a lightning, strike me right now!" he said, holding his arms out wide, bare feet planted firmly. There was no flash and crackle and Mutabaruka dropped his hands and said "see it deh. No lightning no strike".

Throughout his guest-poet slot, Mutabaruka interspersed his poetry with extended examinations of several aspects of society often taken as given, covering fashion, television, diet, colonial history and the shaping of black people's patterns of behaviour in the process. Often humorous (he termed the biblical couple Adam and Eve as the first interracial marriage as Adam was cast as the gardener and was therefore black, and Eve spoke with a snake - something no black woman would ever do) as they stripped away the packaging of social convention and accepted practices, the longest was on the Bible,

Before turning to the Bible, Mutabaruka addressed the contradictory messages of the USA, asking in the poem 'Eyes of Liberty', "what is your democracy all about?" This after taking a caustic look at the expansion of Europe into other parts of the world. "Why is it that everywhere white people go them call the people Indian?" Mutabaruka asked, naming among them Arawak, Aboriginal and Red Indians. Rejecting the term 'West Indian', he spoke to being African, whether or not one was born there. "If a cow born in a pig pen is still a cow ... Jamaica is a nationality. African is a race. Can change you nationality? Can't change you race," he said.

As for the Statue of Liberty, Mutabaruka said it was so named "because them love take liberty with people".

Poetry Society president Tommy Ricketts introduced Mutabaruka, noting that he was among the persons present when the monthly gatherings were officially started nearly 24 years ago. The 24th anniversary will be celebrated in May.

Before the guest poet, the fellowship followed its present format, where the work of a poet - in this case the late Gil Scott Heron - was read by host Yashika Graham and a visual artist's work was set up on stage, Patrice Francis explaining her work.

Much of the open mic, in which anybody who wanted to present a poem signed up, was dominated by prosaic and declamatory pieces, where sentiment and delivery often took precedence over the craft of verse. Among the work presented was 'Unchanged Existence', 'Rebirth' by Lady C, 'Mi Nah Give Up' (Anthony McKenzie), 'Who Rule' (Deon Hardy) and a piece by Black Offspring which ended in a falsetto.

Wareika preceded Prince Oswie with 'Rise', Nazarite, Tamara Burns and Breadlocks (The System) coming before the night's most-discussed poem, 'Coasting' by Black Star. Describing at length an idyllic day in Portland, it initially stirred strong negative response for its apparently aimless wandering, before some reprieve for its 'destressing' objective.

Choice was followed by Oku Onuora, who was guest poet earlier this year, who spoke briefly to memories of poet Mikey Smith before doing a pair of poems. Open mic was closed off by Dingo, who spoke to a closed in, prisoner existence where "mi still a dream/inna style too - flat screen".

During his presentation Mutabaruka welcomed Oku back to making more regular poetry appearances, saying that he had started to feel lonely - not that there are not good younger writers, but Onuora was coming from "them time".

Mutabaruka opened with Christopher Columbus' appearance to him in a nightmare, gloating over his colonial triumphs in the Caribbean. 'I Am De Man' traces the progress of Rastafari in the Jamaican society, despite the odds, and there was a tribute to Lucky Dube, the second Mutabaruka has ever written. The first was for his manager of 20 years, Pele.

'Nursery Rhyme Lament' hit the spot and he discussed the plight of 'The People in the Pot'. 'Thievin Legacy' demanded the return of sundry possessions, from music to liberty to mathematics, by the coloniser.

And Mutabaruka reminded all that "globalisation is really Americanisation", as he wondered how Jamaicans have got into the situation of buying torn jeans when they already had jeans they did not wear because they were torn, sitting "on the sofa whe dem still owe fa" and eating KFC from a oversized cup - with a colonel on the box whose eyes follow you wherever you go. In all of this, he concluded, "the system is a fraud".