50 years of an unbroken bond 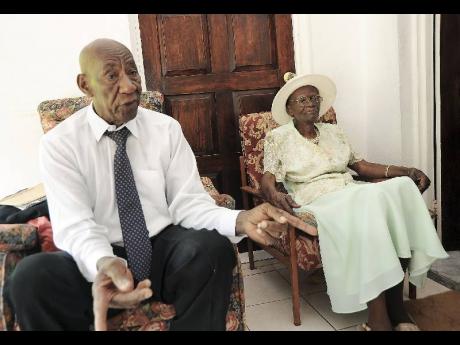 The Reddies speak with The Gleaner from their veranda in the quiet community of Belmont in Hector's River, Portland. - photos by Ian Allen/Photographer 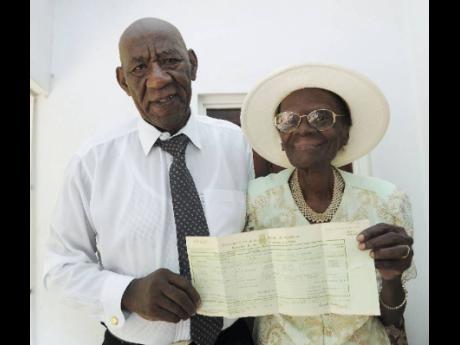 Noel and Lucille Reddie proudly display their marriage certificate issued by the county borough of Bradford, Yorkshire, in England on August 6, 1962, the day Jamaica gained its Independence.
1
2

'As long as Jamaica's Independence lasted, so would our marriage'

When Noel Reddie got the exciting news that his beloved Jamaica was to gain its Independence on August 6, 1962, he immediately decided he would wed his love, Lucille Walker, on that very day.

Noel made himself a promise that as long as the country's Independence lasted, so would his marriage.

Today, 50 years later, he has absolutely no regrets. As far as he is concerned, that was the best decision of his life.

Sitting on their veranda in the quiet community of Belmont in Hector's River, Portland, the Reddies shared their story with The Gleaner.

Despite hailing from opposite ends of the island, they were destined to meet one day, thousands of miles from the country of their birth.

In 1957, Lucille left her hometown in Portland to travel to England. A year later, Noel set out from Hanover and journeyed across the North Atlantic Ocean to the very same destination.

In 1960, their paths crossed in Bradford, Yorkshire in England, and the tall, dark and handsome 27-year-old liked what he saw.

"They said by the fruit you shall know them and, after I got to know her, I knew I didn't have to look any further," Noel said.

The tall, slim and pretty 33-year-old object of his desire was a bit more sceptical.

"When I saw him first, I said he looked moody, but by talking to him and getting to know him, I saw he was not what he looked like," Lucille stated.

Noel began his courtship, but it took him two years to get up the courage to tell her those three all important words.

"We were walking one day and talking, so I tried to get a bit closer to her and she tried to shun me, so I told her how I felt about her," he said.

"I said to him, 'Are you sure? What if it doesn't work because I am older than you?'" Lucille recalled.

She accepted his marriage proposal and the news of Jamaica's Independence Day made it easy for him to set the wedding date.

The Reddies would spend some 35 years in England raising their four children - Anthony, Richard, Christopher and Sandra.

Their years together only served to tighten the bond and to prove just how committed they were to their wedding vows - "for better, for worse; for richer, for poorer; in sickness and in health; until death do us part".

Noel recalls the painful memory of almost losing his one true love in 1964. Lucille had just given birth to their first child, Anthony, but complications developed and she began to bleed heavily, needing a blood transfusion. Suffering from hypertension, her blood pressure went up dangerously high and she lapsed into a coma.

"The doctors said she had a 50-50 chance. I didn't know what I was going to do without her and, having to raise a child on my own. My heart was pounding like a drum. I went down on my knees and prayed hard," he remembered.

"When the doctors finally came back and told me my prayer worked, she would be alright, it was like a weight lifted off my shoulder."

Several years later, the couple would see the roles reversed.

The pressure of Noel's job began to seriously affect his health and one day, while having dinner with his family, he collapsed and was rushed to the hospital.

"When he woke up, he asked what happened. I told him and he said, 'If I die, promise you will take my body back home and bury me in Jamaica'," Lucille recalled. "I said, 'I'm not taking any dead body back home, I'm taking you home.' So I decided then and there that I was going back to Jamaica to make a home for us."

She left Noel in the care of the children and headed to her hometown in Portland to build a home for them.

"When I got back, I told him I had a surprise for him. I told him I had built a home for us and I was taking him back to Jamaica for us to live happily, away from all the stress," she said.

So in 1991, the Reddies finally returned home, leaving their children, who were pursuing successful careers.

"We have no regrets coming back home. In fact, it's been the happiest days of our lives being back in our country and living in Portland. Sometimes I don't even remember I'm from Hanover. Portland is my hometown, it's such a beautiful parish," said Noel.

The two retirees are now active members of their community and Bell Castle Baptist Church.

Looking back over the 50 years of Jamaica's Independence, Noel, now 79, and Lucille, 85, are overjoyed by the progress but feel there is much more to be done.

"I feel great, us being free from British rule. If I had my way, the Queen would have been removed as the head of state from that very day. I strongly support the move for Jamaica to become a republic. It is long overdue," said Noel.

To celebrate the grand 50th anniversary, their children and two grandchildren will be flying in from England to host an affair befitting the occasion.

"We will have a big celebration with friends and family in the church's town hall," said Noel.

Holding his wife's hand, he declared, "I'm telling you this from my heart. It has been 50 years of good living, love, care for each other. It's grand. I wouldn't have swapped her for Mrs Thatcher or Mrs Simpson Miller, or anybody."

Her face blushing red, Lucille laughed on hearing those words.

"It's been just the same for me," she smiled. "I have no regrets. Every day I said I'm thanking God for choosing for me because I couldn't choose a better man."