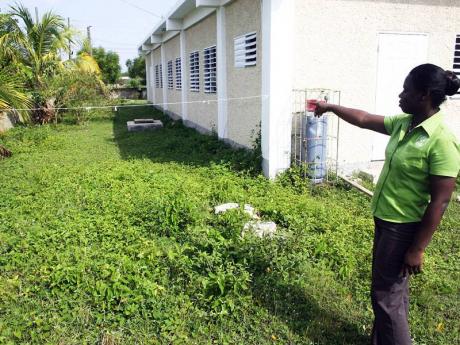 OVERNIGHT RAIN left the playground flooded on Monday, preventing the children from playing outdoors, but this inconvenience was mild in comparison to what students and teachers at the Bridgeport Basic School in St Catherine undergo every day during the dry spell.

Then, the schoolyard is transformed into a dust bowl making work and play difficult, according to principal Nathalie Gilmore.

"Oh Lord, the dust. When it gets pretty dry and it's windy, the children will have colds, teachers have sinus [problems], and that kind of issue. When we come in the mornings, the desks will be dusty, windows dusty, dust everywhere. It's a terrible situation, really," she said with resignation.

With the schoolyard waterlogged when The Gleaner visited, there would be no dust nuisance for at least another day, and while it was the better of two evils, there was still some inconvenience for the 90 students between the ages of three and six years old enrolled there.

Gilmore explains: "As you can see, right now because of the rain, outside of the dust, we have minor flooding out there. So it's difficult for the children to even walk from the gate to the building, and we have to select the areas in which they can play or probably keep them inside because outside is flooded.

"In terms of health, the rain doesn't affect health, but with the dust, the children will get colds and you have children here that are asthmatic. Well, the both of them really (are bad) because, when it rains, they can't play, and play at their stage of development is very important."

Meanwhile, the Bridgeport Farmers' Association, which recently adopted the school, has been trying to get the private sector to address the situation as a matter of urgency. President Michelle Brown told The Gleaner that these efforts are continuing as the organisation is very concerned about the long-term impact on the health of the five teachers and their charges.

The Bridgeport Farmers' Association is also planning to help the school cut its food bill by converting a section at the back of the school into a garden, planting cash crops such as cabbage, callaloo and tomatoes, which can be used from the garden.

It's an idea Principal Gilmore welcomes, given that each week some $2,500 is spent on ground provisions and seasoning. In addition, the association is planning to help set up a composting plant and she is looking forward to the children's early exposure to this environmentally friendly activity.

In the meantime, for the sake of her staff and the tiny charges in their care, the principal is appealing to individuals or agencies which can assist in levelling the schoolyard and grassing it, because, whatever the weather conditions, they are severely affected.