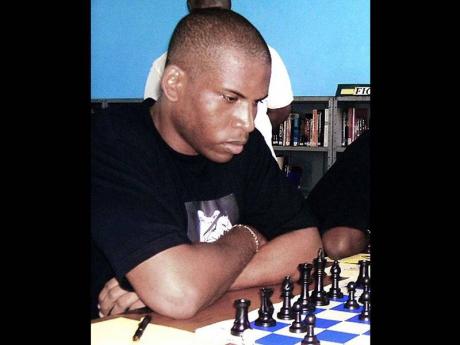 Up to yesterday, it was a three-way tie for first place as the final weekend of the National Chess Championships approaches.

Fide Master Shane 'The Magician' Matthews lost his slim lead from the previous week and, along with FM Warren Elliot and International Master Jomo Pitterson, is locked on 4.5 points at the end of round 6 last Sunday afternoon and lead the field of 24 players.

Games were played at the Norman Manley Law School.

While these three all hold a half point edge ahead of defending National Champion, National Master Damion Davy, Candidate Master Duane Rowe, flying in to play from Oman, NM Andrew Mellace, NM Peter Myers and NM Malaku Lorne each on four points - it is still a wide-open field and it is hard to pick a potential winner.

Play continued late last night at the Spanish Court Hotel where the matchups were as follows:

Last night's results on the top four boards, if clearly decisive, that is, if there are no draws, would be significant results to help determine the final outcome. If the draws happen, then the tightness of the field going into the final two rounds going into tomorrow and Sunday will remain intact. But as it stands, three of the predicted top four, IM Pitterson, FM Elliot and FM Matthews, are leading the field so far.

In the National Women's Championships, Krishna Gray leads the field comfortably on 4.5 points in the eight-woman field. There is one game outstanding from round six which was scheduled for last night, and the outcome of that could put CM Hui Zhu on 3.5, making her closest to Gray's lead.

With two rounds to go, Gray appears well poised, barring any mishaps, to win this title for the first time. This will also be the first time in 10 years that a new female champion is crowned, as WFM Deborah Richards-Porter has had a stranglehold on the trophy since 2001. WFM Richards-Porter is not playing in the tournament this year as she is competing in the open section and hence could not defend her title, since the two tournaments are being run simultaneously.

Young Alistair Walker leads the President's Invitational at the end of the first of the double round robin by a clear 1.5 points after attaining a perfect score from his four games. Play in this competition also continues tomorrow. So far, the immaculately attired Walker, who has come each week looking very smart, seems clearly set to capture the President's Special Award for the best-dressed competitor for the tournament. Others have had short snaps of smooth dressing but so far only Walker has been consistent.