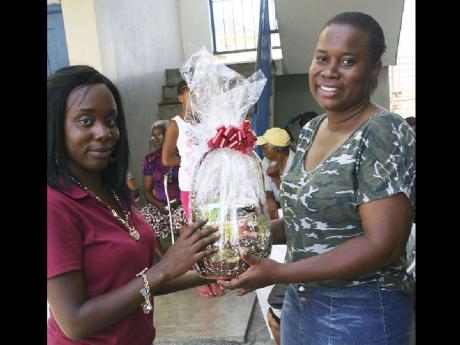 Michelle Brown (left), president of the Bridgeport Farmers' Association, presents a basket to Trudy Edwards for winning the farm trivia quiz, at the health fair and blood drive hosted by the Portmore Missionary Church on Saturday, April 21. 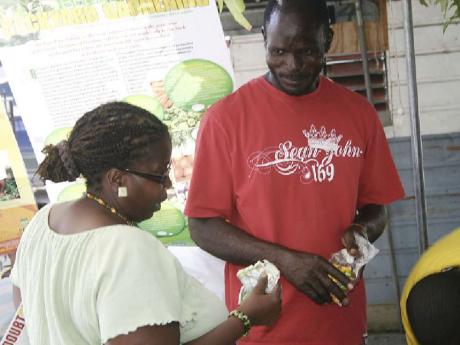 This customer seems to be contemplating whether she is getting value for money before making the purchase while Paul Morgan of the Bridgeport Farmers' Association awaits her decision.
1
2

THE EVENT was billed as a health fair and blood drive hosted by the Portmore Missionary Church at 114 Cecile Avenue, Edgewater, so the Bridgeport Farmers' Association booth conspicuously located near the entrance stood out like a sore thumb. However, as president Michelle Brown explained, the group was committed to promoting a healthy lifestyle among its members and customers, so it was a natural fit.

In addition to vegetable seedlings, pumpkin, sweet potato, hot peppers, and other farm produce on sale last Saturday, the association also had brochures on backyard gardening, which it is promoting, in an effort to get more Jamaicans to take their health, literally, into their own hands. The response was good, with most of the patrons asking questions about backyard gardening, and for those interested enough, the starter kit being promoted by the Agriculture Ministry was available for sale.

Brown, who is a contestant in the St Catherine Farm Queen competition, was heartened by the interest shown especially by women. "They seemed to grasp the importance of growing their own things, so they can be assured of the input. And then there is the satisfaction of nurturing these short-term crops, caring for them, and watching them come to fruition," she told The Gleaner.

"Usually, that is what draws them to it, but over time, they begin to appreciate the exercise value of this activity, which can be conducted at their own pace. And then there is the cost saving when you reap the crops, and the joy of sharing with neighbours," she added.

The Bridgeport Farmers' Asso-ciation, comprising persons drawn from different professions, sees farming as a serious income earner and a route to ensuring, to some extent, food security. With most of its members living in housing schemes with limited land space for farming, the group has been doing well and has been using land owned by one of its members at Bernard Lodge to carry out large-scale activities. In addition to field days and practical training sessions, they also have work days there.

Members of the association, which is a legally registered entity, have been trying since October 2010 to buy land in the nearby Bernard Lodge area to expand its agricultural offerings, but without much luck.

Brown communicated the frustration of her members at the delay in acquiring the land despite promises from the relevant agencies: "We've received little response. National Land Agency says that it's in the making, but that's from 2010. We try and let everybody know. We've written to the Ministry of Agriculture."

Despite this, the group remains resolute in its efforts and admits to having received some support, with Donovan Stanberry, permanent secretary in the Agriculture Ministry who attended its official launch, being a staunch supporter. The Rural Agricultural Development Authority has provided it with backyard gardening kits, and fertiliser manufacturer, Fersan, has donated some product.

Brown explained that in addition to planting crops, the association would actively seek to educate consumers about how best to utilise these foods in order to get the maximum nutritional value. For those doing backyard gardening, it will provide a kind of extension service by way of teaching them about how to care for the soil on an ongoing basis.

The group is also very environmentally conscious, and so composting is a big part of its education drive.