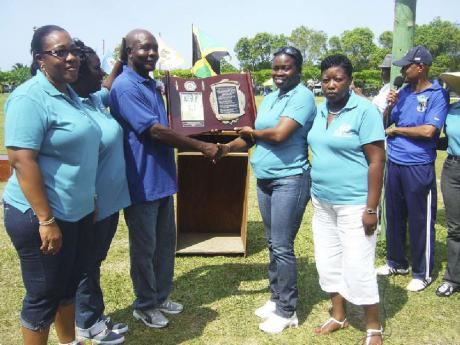 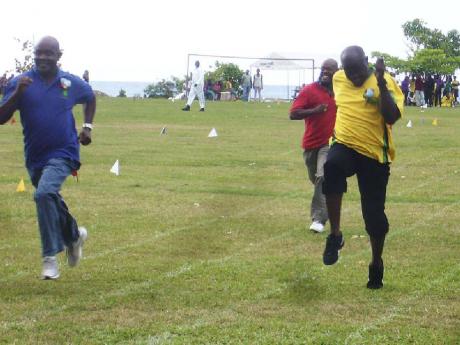 ON THURSDAY, April 19, the Area II Police Sports Club gave ACP Derrick Shand, area officer for St Mary, a plaque for his sterling contribution to the community. The beautifully designed trophy was the latest of the many awards and honours the long-serving lawman has received over the years for policing and community service. He is also a 1998 recipient of the Governor General's Achievement Award for St Thomas, and an awardee of a St John's Ambulance Brigade medal for first aid.

Against the backdrop of James Bond Beach, at Oracabessa, St Mary, and surrounded by four of his female colleagues, the 61-year-old officer beamed with pride as the citation was read. It was a fitting tribute to the man, who is an athlete himself, on his last official police sports day. Later in the day, he outsprinted DSP Michael Dowe and SP Dudley Scott to win the officers' race.

His month-end retirement comes after 42 years of unbroken and dedicated service to the force, serving in many divisions including St Thomas, which was his longest stint, and perhaps where he has made the greatest impact. He is the founder of the Seaforth, Danvers Pen, and Hillside Police Youth clubs. He was also president of the Parent-Teacher Association of Duckenfield Primary School, vice-chairman of the Port Morant Primary and Junior High School Board, and a member of the Lions Club of St Thomas.

In Kingston, he was a member of the Franklyn Town Community Development Action Committee, the Franklyn Town Education Trust, the Area IV Civic Committee, and Kingston Eastern Citizens in Action for Peace and Unity. Shand was also chairman of the Association for the Control of Sexually Transmitted Diseases.

The most memorable incident in his career, he said, has nothing to do with crime-fighting, but with playing 'nurse' when he delivered a baby girl in St Catherine. The child's clueless young father was beside himself with anxiety, so Shand jumped in and made a successful delivery. Cutting the umbilical cord was a challenge, so the mother and child were taken to hospital still connected.

The Resource, Manchester, native himself, who has risen through the ranks of the force, is no stranger to challenges. Coming from an already humble background, he had to assume some of the responsibilities for his family when his father died in England when he was 10 years old. The seventh of 10 children occupied himself with picking pimento and coffee, and planting peas and corn, among other odd jobs. He joined the force in 1970 at age 19.

Now, at 61, retiring from the grind of the Jamaica Constabulary Force without a 'scratch', this indefatigable man has no intention of going home and sitting on his laurels. The fight continues, and in retirement, it will be against poverty. He wants to embark upon a project to help children who depend on a certain garbage dump for survival, the father of six children with university degrees revealed.