The mirror with a twist 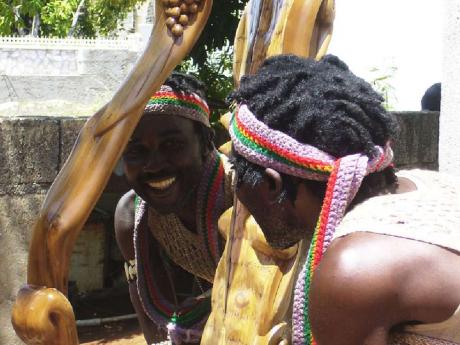 The man in his mirror is Jomo Christie, but he's not asking him to change his way. He's embracing him and his artistry. 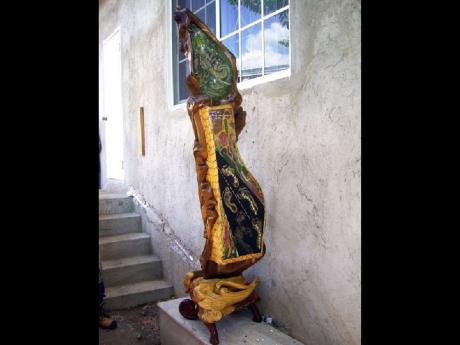 The back of Jomo Christie's mirror consists of two pieces of painting encased by polished matchsticks. 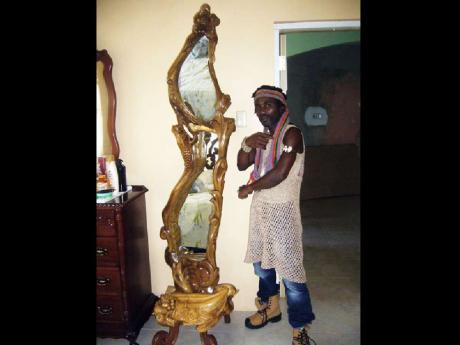 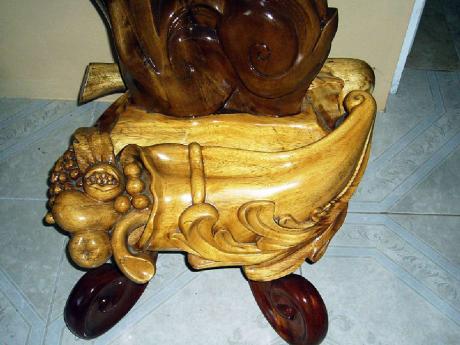 The cornucopia - the horn of plenty - sculpted on Jomo Christie's mirror base made of guango wood.
1
2
3
4

MIRRORS, MIRRORS, on the wall, whose is the grandest of them all? Jomo Njeri Gonguru Christie's certainly is, only that this two-face work of art isn't hanging from a wall; it's standing more than six feet tall on four legs made of mahogany wood.

A mirror like none other, it doesn't allow you for too long to behold your beauty from its gleaming faces, but it gets you to gawk at it, admiring its curves and details, turning the tables on you.

Christie calls it 'The Stranger in the Mirror' because "there's a whole lot a people who look at themselves in the mirror, and they are not in love with what they see, they don't know who they are ... they are looking at a stranger", he said. His stylishly sculptured asymmetrical frame can help such people to appreciate themselves more. They just have to look at it, and then look into the glass and they will see their own beauty come shining through.

This wood and glass masterpiece started its glamorous existence in 2009 in Enfield, St Mary, as a piece of oak tree root near a river. The Johnson Hill, St Catherine, resident thought it could make a mirror frame, and when he eventually unearthed all of it, he said he realised it had a feminine shape. "It has a feminine look to it; if you look on the entirety of the root itself, you realise it has a feminine kind of thing about it," he said. That feminine quality was to become the theme of his most avant garde work so far.

The top part of the root already had a hole in it, so Christie only had to clean it up. The space for the second section was sculpted by hand. After the wood was cleaned, some patterns were sketched, but Christie said the others were not of his own doing, as he was guided by his ancestors. And after much cleaning, sculpting, varnishing and polishing, it is now the grandeur that it is. "The inspiration behind it come from the ancestors enuh, cah dem really talk to mi, guide mi hands, a mi ancestors dem teach mi," he declared with pride.

Not one inch of this oak and guango handiwork is bland. There's art everywhere, with each part depicting an aspect of the theme of femininity. The smaller sector of the mirror, topped by a flower representing the "mother of the family", has a strong surrealistic influence as it looks like one of Salivador Dali's melted clocks. Dali was a great 20th-century Spanish sculptor, graphic artist, designer, and surrealistic painter, known for his melted clocks and other thought-provoking motifs.

The frame itself looks like a composite of leaves and vines, with a bunch of grapes "representing the family" hanging from a hibiscus flower on the left, near where the smaller mirror meets the bigger piece. And the theme of fertility and reproduction is also conveyed with a cornucopia - the horn of plenty - sculpted on the guango wood base.

At the back of each piece of glass is a painting. The top one shows children who have not fallen through the cracks of life. The bigger canvas, enclosed by hundreds of varnished matchsticks, has giant footprints on it, the prints of Christie's son, Adjata, and those of a friend's children, Nhefhatarhi and Khahlungah. They are "venturing into the great unknown", perhaps searching for themselves in the mirror.

It's functional art, not art for art's sake, but for its aesthetics and utility. It reflects the artistry of a man who calls himself a warrior, a rebel if you will, a nonconformist rebelling against the ridiculous and the mundane, creating the extraordinary. "Sculpting allow me to be myself more, it mek mi go inna myself more, it mek mi do some soul-searching, it mek mi come up with some nice things about myself that mi never know seh was there," said the man who is also a jeweller, woodworker, and an artist, among other things.

Christie wants people to see his mirror as a reminder that there is beauty in everything around them. It doesn't matter how it looks, take it up, brush it off, and you will see the beauty in it, breathe new energy into it, he said, "just like how mi put back life inna the dead tree". It's emblematic of the love that he has within, he said, of his creation "because if you don't have love in you, you can't come up with beautiful things".

This mother of all mirrors is an inspiration for the sculptor who has his own challenges because it makes people happy, he said. "When a man can look at my artwork and feel good bout it, wha yuh think?" he asked.