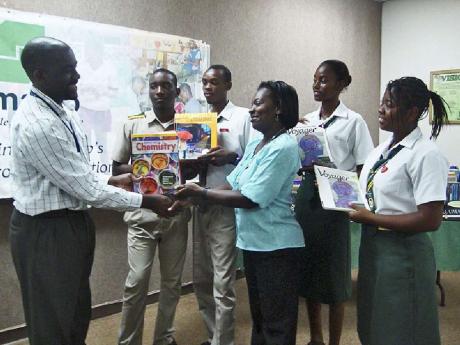 OVER 50 schools across Jamaica are set to benefit from Jamalco's annual book-distribution programme.

On Wednesday, April 25, Jamalco launched its 2012 Book Distribution programme where some 30,000 books will be given to the schools to assist in improving literacy and to supplement the textbooks available at the school.

Guest speaker and education officer at the Ministry of Education, Region 6, Patricia Perry, said although it is a technological age, children should still find the time to read. "We have more cellphones and computers than many places, but do not use them for educational purposes," she stated.

Perry commended Jamalco for its dedication to advancing and facilitating reading by distributing hard copies of books to schools.

In his address, Jamalco's human resources manager, Christopher Buckmaster, noted that Jamalco had not only been donating books to children and schools, but the company had been contributing to the education of children in various ways. "We believe that if we help to educate our people we are not only helping them to help themselves, but we are preparing them to create a better community for all of us to live and work," he said.

Buckmaster encouraged the schools to make the books available to the students. "Do not lock them away in the libraries or storerooms. They must be prominently displayed and accessible to all students who wish to use them," he said.

Chairman of the Refinery Community Council, Lorine Cousins, lauded Jamalco for its book programme, which has spanned three decades. "I know the books are being put to good use because I often visit some of the schools," she said. She added that there were many libraries that were in need of books, so this was very timely.

In her overview, communications specialist, Ealane Livingston Smith, explained that the books would be donated cover a range of subject areas and would include recreational reading material as well as multimedia items. "Over the past few years, the shipments have included many items that support the Government's drive to improve literacy among our children," she said.

The Jamalco Book Programme is in its 30th year, and since its inception, Jamalco has received at least one container of books per year for distribution to schools, colleges, universities, and libraries islandwide.

Under the programme, books are sourced from American publishers by the Brothers' Brother Foundation and a list is sent to Jamalco, which makes the selections. When the books are received, Jamalco sorts, stamps, packages, and distributes them to institutions islandwide. The books are shipped to Jamaica with funds from the Alcoa Foundation.