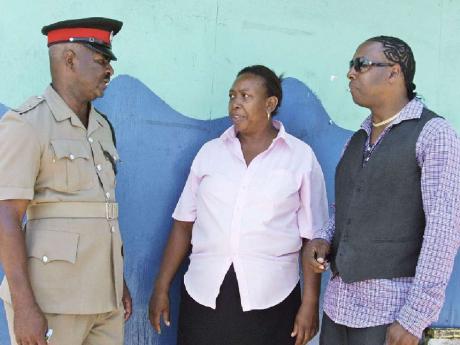 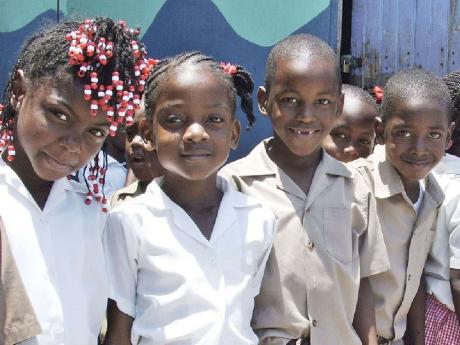 Students at Pineapple Basic School in Pineapple, Ocho Rios, smile for the camera. 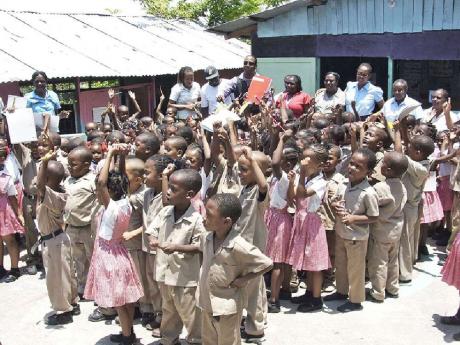 THE PINEAPPLE Citizens' Association (PCA), led by president Dennis 'Bully Cat' Gordon, is becoming a model citizens' association for other such organisations to emulate.

On Tuesday, students at the Pineapple Basic School, located in Ocho Rios, were in for a treat as the PCA presented them with books and pencils and handed over a cheque for $10,000 to the institution.

Gordon, along with secretary, Beverley Reynolds, several youngsters, and Inspector Lionel Rayson of the Ocho Rios police, turned out for the event, which came on the heels of the annual Easter treat, held Easter Saturday.

"We donated 10 boxes of books, five boxes of pencils, and $10,000," Gordon told The Gleaner. "It came from the Pineapple Citizens' Association's fund-raising events."

Gordon was grateful for the support the association has been receiving from the business community and the police.

"I want to thank Superintendent (Gary) Francis of the Ocho Rios police. The police are always there to support us, and if there's a conflict in the community, Mr Francis would always come and assist us in getting it settled," Gordon said.

"Mr Kumar (Sujanani) of Gem Palace has helped us a great deal. Anytime I call on him, he's always there to assist us. The thing is, even though I'm the head of the association, the support comes from so many persons in Ocho Rios."

Last year, the PCA repaired the basic school. Materials such as board, zinc, and toilet facilities were donated by Rapid True Value, which is located in Pineapple.

"We need to create a family thing among one another," Gordon said. "We're supposed to be able to help one another. That is what I'm trying to bring to the community."

For more than 20 years, Gordon and the PCA have been hosting Christmas and Easter treats for kids, initially for those in the community, but now, for kids all over St Ann and even neighbouring parishes.

On Labour Day, the PCA painted sections of the Ocho Rios Police Station and donated 50 rolls of toilet tissue to the children's ward at the St Ann's Bay Hospital.

School principal Leoni Golding was grateful for the citizens' help.

"I'm very grateful for the assistance," she told The Gleaner after collecting the donation.

Golding revealed that the school, with 180 students on roll and eight teachers, has been doing well, producing students of the calibre of two-time Gleaner Spelling Bee parish champion, Sejae Burey, who now attends Ferncourt High.

The school has also attracted students from as far away as Runaway Bay in St Ann, and Gayle, Port Maria, and Charles Town in St Mary.

Golding also expressed hope that moving forward, the school would be able to purchase the land on which it is located which, she said, is owned by government agency Urban Development Corporation.

For his part, Rayson praised the efforts being made by the citizens' association.

"This is a good venture. Civic groups like these play an important role in society," Rayson said. According to him, the police usually visit community groups such as the Pineapple Citizens' Association and plan ways to interact with communities.