The business of change - Contractor establishes business in rough neighbourhood 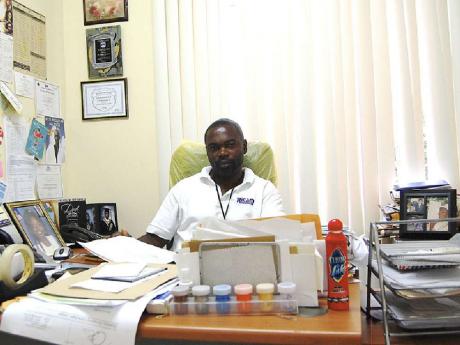 DEVON RICHARDS is making a difference in the reputed volatile community of Greenvale, Manchester, the home of his company, Ricam Construction.

Richards could have chosen to set up his company in other places, but he chose to establish it in the area where he grew up in a move to build the community.

Entering Bethel Street in Greenvale, where his company is located, a sign at the entrance reads, 'Welcome to Bethel Street, home of Ricam Construction'. This is indicative of the relationship that the company has and its importance to the people of the community.

"Greenvale has always been an impoverished area because opportunities have not always been so readily available," Richards said. "In the early days, you will have people fighting with machetes, knives, stones, but now we are seeing where the guns are coming into play."

Richards attended deCarteret College, but migrated to Canada before completing high school. "My grandmother, Advira Richards was a strict woman who saw to it that I did my chores and beat the books. After a time though, I started to get rebellious. After playing marble with some friends one evening when I reached home, she gave me a fine beating. She called my father in Canada the following day and told him that him better send for me because she a guh kill mi because she not going to let me stay on the street and turn cruff."

Richards' father complied and he continued his schooling in Canada. However, with his father having two jobs, he found himself alone most of the time, which saw him going on the wrong path.

"I began going to the nearby park and started hanging out with some kids who were involved in a lot of illegal activities," he disclosed.

Richards ended up in a juvenile detention centre. "Things started escalating, and at one time, I started carrying a gun. I went to jail in 1989," he said. "I sat back and looked back at where I was coming from (and) I said instead I waste myself here (Canada), I think it is better I go back to Jamaica to my roots."

Richards returned to Jamaica in 1995 and after a while got a job working at the Social Development Commission (SDC).

Through the SDC, Richards got the opportunity to do a great deal of work in Greenvale. He was greatly influenced by former mayor of Mandeville, Horace Williams, who encouraged him to stay on the right path and make a difference in the community.

Having a bachelor's degree in engineering from George Brown University, Richards decided to set up the Ricam Construction Company.

"I started Ricam Construction Company in 2005, working from my house, and used persons from the community as my workers," Richards said.

He added: "I got this piece of land in Greenvale, and I made the decision to build my office right there. Many persons tried to discourage me saying that they would rob me and other negative things, but I told them, if I am putting something in the community that is going to benefit the community, then the people from the community must be security."

Richards added: "I can stand up today and say that I can put down materials outside and they will want it, but they will never touch it. They are the watchmen of this company. And it is simple because I provide employment for them. There are persons who basically didn't know how to hold a shovel, but are some of the best tradesmen that I have come across in Jamaica. They can't top the tradesmen that we have here in Greenvale."

He noted that there were companies that did not want to hire persons from areas such as Greenvale. "However, if you don't give them that first opportunity to go forward, you will always have problems, including crimes," he commented.