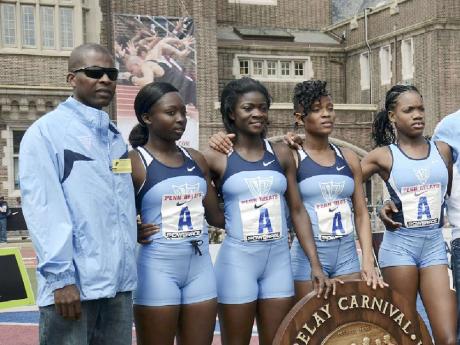 The Frankfield, Clarendon-based school won two relay titles. They retained their 4x800-metre crown before ending the meet with a sweet victory in the 4x400m topping Jamaican rivals Holmwood Technical and Vere Technical.

Montaque who was a member of last year's winning team along with Thompson and Eubanks was very elated with her team's win.

"I am happy we were able to come back and defend our title successfully although I was a bit disappointed with my run as I felt a cramp in my leg early and decided to take it easy," said Montaque.

In the 4x400m, the quartet of Saqukine Cameron, Montaque, Shawnette Lewin and Camira Haughton stopped the clock at 3:42.06. Holmwood Technical were second in 3:43.93 while defending champions Vere were third in 3:45.23.

There was no luck for Jamaican female teams in the 4x100m Championships of America final. Defending champions Long Beach Poly of California turned back the challenges of six Jamaican teams in the final, winning in 46.35 seconds, one of the slowest winning times in recent years.

Edwin Allen were well placed after three legs and appeared set for victory but their anchor leg runner, Dejah Stewart, was gobbled up near to the line by the Long Beach runner. Stewart faded to third in 46.55 as Herbert Morrison took second in 46.49. St. Jago High (46.98) were fifth, Wolmer's Girls sixth in 47.11 while the Queens School (47.72) and Vere Technical (47.81) finished seventh and eight.

Former champions Holmwood made up for their disappointing run in Thursday's heats to capture the Small School consolation final in 46.26 seconds, a time which was faster than Long Beach, winners of the Championships finals. St Elizabeth Technical ( 46.84) were third while Convent of Mercy Alpha (46.86) and Camperdown High (47.65) were fourth and fifth, respectively.