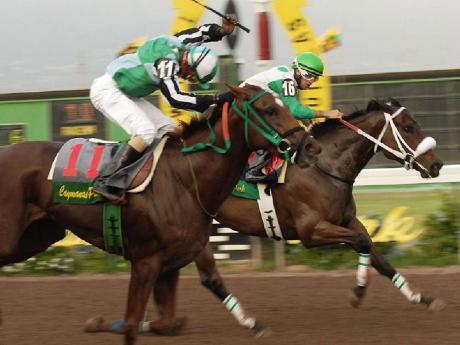 The 99-1 outsider, SHE'S TRADITIONAL (No.11), is hard driven by Trevor Simpson to beat 6-1 chance STAR FLYER, with champion jockey Dick Cardenas aboard, by a short head in the 38th running of the 1000 Guineas over 1600 metres for 3-y-o fillies, at Caymanas Park on Saturday, April 7.- Colin Hamilton/Freelance Photographer 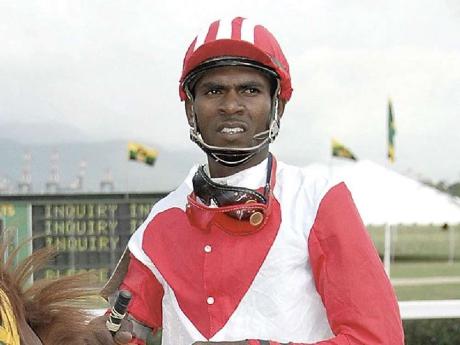 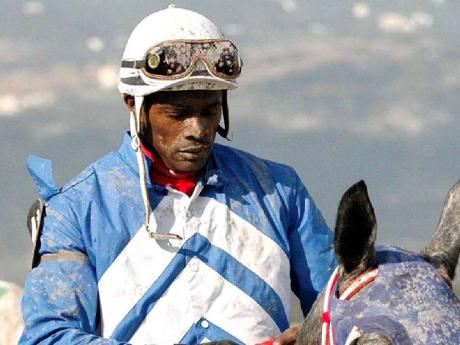 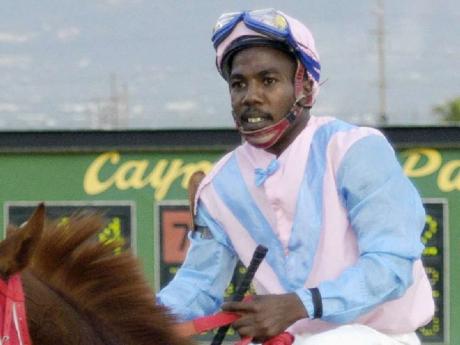 Fourteen native-bred three-year-old fillies are down to face the starter in the 75th running of the Bigga Jamaica Oaks over 2000 metres, and with the recent 1000 Guineas winner SHE'S TRADITIONAL and runner-up STAR FLYER present, it should be an intriguing contest.

A notable absentee from the lineup is TRINITHETUTOR, who would have been one of the top contenders after finishing a close third in the 1000 Guineas over 1600 metres on April 7.

According to trainer Gary Subratie, TRINITHETUTOR picked up a virus last week. This was accompanied by high fever.

Despite her absence, the race should still be keenly contested. Only a short head separated SHE'S TRADITIONAL and STAR FLYER at the finish of the 1000 Guineas, and with the fourth-place horse, AINTOINETTE, also present, as well as fifth-place EXOTIC GOLD and sixth-place horse PHILISTIA, interest in this the season's third classic is particularly high.

Also expected to make a better showing is CLASSIC PRINCESS, who is conditioned by the young trainer Nicholas Edwards, who said she is truly ready for this race after flopping (10th) in the Guineas. She has been fitted with the figure eight for this race and won't be far adrift on this occasion.

A noticeable feature of the race is a significant number of jockeys' changes from the Guineas to the Oaks.

Five-time champion Trevor Simpson, who rode SHE'S TRADITIONAL to victory in the Guineas, has surprisingly been 'jocked off' by trainer and part-owner Fitzroy Glipsie, who has called up four-time champion Omar Walker. Simpson will now ride

Ante-post favourite STAR FLYER
again has the services of champion jockey Dick Cardenas. All of the top
contenders have looked sharp at exercise, especially STAR FLYER, who
galloped seven furlongs in a brisk 1:27.4 on Sunday morning and SHE'S
TRADITIONAL, who looked super fit on Monday morning when breezing 5 1/2
furlongs in 1:07.1.

Key to the
Oaks

While others such as PHILISTIA, EXOTIC GOLD and
CLASSIC PRINCESS should run vastly improved races over the longer
distance, I think the outcome of the 1000 Guineas holds the key to the
Oaks.

The victory of SHE'S TRADITIONAL was by no means
a fluke, as she had come on at just the right time for that shock win
at odds of 99-1.

However, I believe STAR FLYER will
turn the tables on her with Lasix administered, for the simple reason
that she has greater scope for improvement, having made her racecourse
debut as recent as March 24 when scoring over 1200 metres in maiden
company.

Her inexperience obviously cost her the
Guineas, but things will be different today.

"She has
lots of scope and plenty of class," said her confident trainer, Anthony
'Baba' Nunes, last Saturday.

I also like HERMOSO AMIGO
in the third race, REGGAE ROCK in the fourth, SLICE OF LIFE in the
fifth, LISA VIBES in the sixth and PRECISELY BABY in the
seventh.