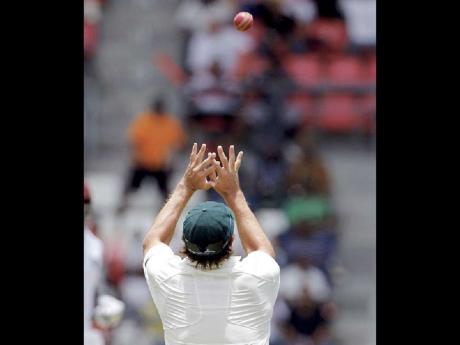 Australia's Ben Hilfenhaus gets set to take the catch to dismiss West Indies' captain Darren Sammy for 61 runs during the second innings on the final day of the third Test match in Roseau, Dominica, yesterday. - AP 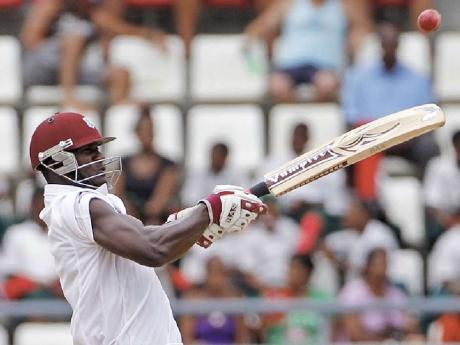 West Indies' captain Darren Sammy plays a shot off Australia's Ryan Harris during the second innings on the final day of the third Test match in Roseau, Dominica, yesterday. Sammy made 61. - AP
1
2

Captain Darren Sammy posted his highest Test score but it proved in vain as West Indies plunged to a 75-run defeat in the third and final Test here yesterday.

Resuming the final day on 173 for five and needing a virtual miracle to reach their target of 370, West Indies lost their last five wickets for 121 runs to be dismissed on the stroke of lunch for 294.

It was enough time for Sammy to plunder a typically stroke-filled 61, an innings that entertained a large Windsor Park crowd despite the disappointment of defeat.

He put on a robust 49 for the last wicket with hometown boy Shane Shillingford whose career-best unbeaten 31 was equally as entertaining.

Their cavalier approach brightened an otherwise depressing result for West Indies as it extended their wretched record with only three wins in their last 31 Tests.

Starting the day needing an improbable 197 for victory, West Indies were quickly undermined by left-arm spinner Michael Clarke who picked up two of the wickets to fall, to finish with five for 86.

The Aussie captain struck the decisive blow just six overs into the morning session with seven runs added when he had Narsingh Deonarine caught and bowled after adding just two to his overnight 11.

Left-hander Deonarine appeared to drive the ball into the pitch before it carried to Clarke but umpire Ian Gould gave him out after consulting the third umpire, though replays were not entirely conclusive.

His dismissal paved the way for the Sammy show as the right-hander played with gay abandon in smashing four fours and three sixes off 51 balls.

He cleared the ropes at long off with off-spinner Nathan Lyon (3-87) off the fourth ball he faced and then tore into Clarke, taking two fours and a swatted six over miwicket in the bowler's 20th over that cost 17 runs.

Sammy put on 26 for the seventh wicket with Carlton Baugh, who scored 12 before pulling to Ricky Ponting at short midwicket off Lyon.

Kemar Roach, who made two, stayed with Sammy to add 28 for the eighth wicket but fell to a brilliant one-handed catch by Clarke at slip, the fielder diving to his left.

When Ravi Rampaul smashed a four and a six in 11 before holing out to David Warner at mid-on off Clarke, the innings seemed to be all over.

But Sammy and Shillingford indulged themselves, ignoring the death throes to ensure the Aussies worked for the last wicket.

Shillingford collected three consecutive boundaries in Lyon's 29th over and delighted his countrymen with a pulled four off seamer Ryan Harris and a proficient drive off left-arm pacer Mitchell Starc to the cover boundary.

The entertainment inevitably ended when Sammy top-edged a slog-sweep to Ben Hilfenhaus off Lyon, handing the Aussies a 2-0 win in the three-match series.

They won the first Test in Barbados by three wickets, with the second Test in Trinidad finishing in a draw.

Man of the Match: Matthew Wade.

Man of the Series: Shivnarine Chanderpaul.