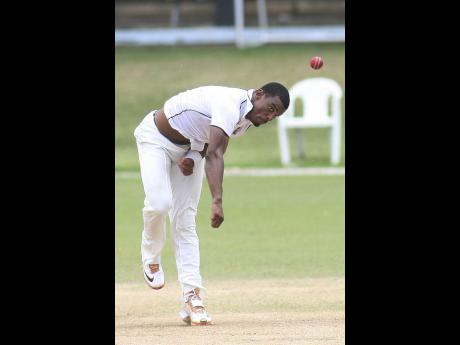 Selectors have called up an uncapped right-arm pacer, 23 year-old Trinidadian Shannon Gabriel, to the West Indies 15-man squad for the three-Test tour of England starting next week.

Gabriel who made his first-class debut for Trinidad and Tobago in 2010 has taken 63 wickets in 23 matches.

As expected, the squad will be led by Darren Sammy with Kirk Edwards as his deputy.

Commenting on the squad, chairman of the West Indies Cricket Board's selection panel, Clyde Butts, said: "We are going to England early in the season, where the conditions tend to favour the quick bowlers more than the spinners.

"Young Gabriel continues to impress the selectors in both regional and A-Team cricket, and we feel it is a good time to introduce him to the team. We feel he will be an asset to the team in England and has a bright future in West Indies cricket.

"Shane Shillingford has bowled very well against the Australians and we expect a lot from him in England. Davendra Bishoo has done well for West Indies in the last year or so, but he has lost some of his confidence and the selectors feel playing him in the A-Team against India-A will give him the chance to regain that confidence."

Butts added: "We have got to continue to build for the future and we believe that Barath and Powell have bright futures in the game.

"We also feel this way about Kraigg Brathwaite but he, too, has lost some of his conviction, and the selectors also feel playing him in the A-Team against India-A will give him the chance to regain that confidence. None of the other openers in the region have stood out and we are hoping to strengthen this part of our cricket in future regional tournaments and the A-Team tours."

Butts said: "Carlton Baugh has been good behind the stumps, but his batting has not quite lived up to expectations, hence the selection of Ramdin. Before he got injured in the camp prior to the Digicel Series against Australia, Denesh was showing good form both behind the stumps and with the bat.