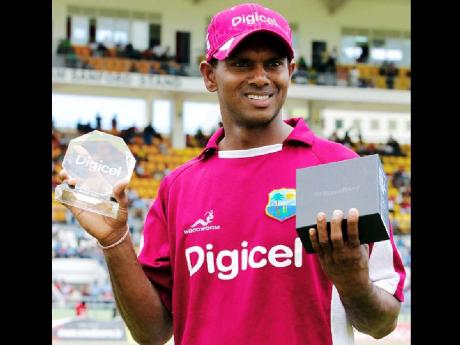 West Indies' Shivnarine Chanderpaul poses with the Man of the Series trophy during the presentation ceremony for the third and final cricket Test match against Australia in Roseau, Dominica, yesterday. - AP

Enduring left-hander Shivnarine Chanderpaul has pledged to continue helping the next generation of West Indies batsmen, after becoming only the 10th player in history to surpass 10,000 Test runs.

The 37-year-old Guyanese top-scored with 69 on Thursday to achieve the milestone, on the penultimate day of the third and final Test against Australia at Windsor Park here.

"I have received support from many people over the years and I want to thank everyone for their massive support and their belief in me," Chanderpaul said afterwards.

"I just give thanks for all that I have achieved and the fact that I am still around, fit and strong and I can continue to contribute.

"When I started, I came into a team with many big names and I was able to learn from them and build on what they taught me. Now, part of my role in the team is to help the younger players to do well and try to improve their game and become better cricketers for the team."

Chanderpaul is only the second West Indies batsman to achieve the feat, following the legendary Brian Lara who scored 11,953 runs in an illustrious career.

He now has 10,055 runs from 140 Tests and an average of 50, having already scored 25 centuries - just one behind the incomparable Sir Garfield Sobers.

"It felt really, really good to reach this milestone today and I am very excited. I have been batting well and spending a lot of time at the crease, and to reach 10,000 Test runs in something special for me," he said.

"It was one of the goals I set myself and I believe I have reaped the reward for the hard work I put in over the years. I have worked hard over the years and when I go to bat I know I have a job to do for the team and the people of the West Indies.

"Test cricket is the ultimate form of the game and this is where you want to perform and give of your best. I will keep striving for more."

Chanderpaul has been outstanding in the current series with an aggregate of 346 runs at an average of 86.