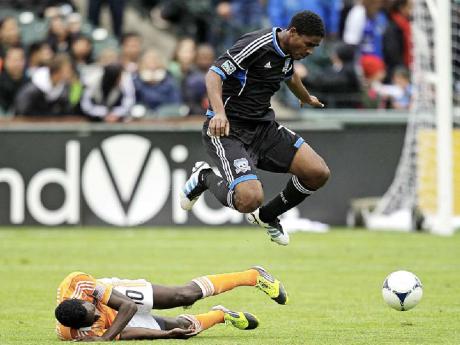 Reggae Boy Khari Stephenson, boosted by a goal and assist while leading San Jose Earthquakes to another win last Saturday, will hope to carry his form into this weekend's round of Major League Soccer (MLS) matches, which will feature several Jamaicans in action.

Stephenson and San Jose, currently leading the MLS Western Conference (WC), play at Philadelphia Union today. The midfielder will be joined by English-born forward Simon Dawkins, another with Jamaican roots, who also scored against Real Salt Lake (RSL) in the 3-1 victory. Both players started and played the entire game for San Jose, which have a record of five wins, a loss and one draw.

Also today in North America's top professional football league, RSL, with former national player Andy Williams on the coaching staff, host struggling Toronto F.C., which feature Jamaica striker Ryan Johnson, but are without a point in all six matches and planted at the bottom of the Eastern Conference (EC). Johnson took five shots in last weekend's 3-2 loss to Chicago Fire, but failed to add to his single goal of MLS 2012.

National striker Omar Cummings, currently on a roller-coaster ride with Colorado Rapids, will get another chance for an upswing when Chivas USA visit today. Cummings scored in last weekend's 2-1 loss to defending champions Los Angeles Galaxy, but missed a crucial 90th minute penalty, which would have earned his club a point.

Instead the Rapids' decline has hit three straight losses, dropping them to eighth place in the nine-team EC. However, Colorado have not lost confidence in the Jamaican striker, who also picked up a caution against Los Angeles.

"Omar scored a fantastic goal (Saturday)," Drew Moor told Colorado's website. "He missed a PK, but you'd put Omar to take a PK 99 times out of a 100."

Cummings's task won't be easy against Chivas, coached by Jamaican-born Robin Fraser. They are coming off a 1-0 loss against Philadelphia last weekend, but have one of the stingiest defences in MLS, conceding no more than a single goal in any game this season. Cummings will have help, however, as regular strike partner Connor Casey is expected back from injury and Colorado recently signed Brazilian forward Edu.

But Chivas, despite falling to seventh in the WC, have Ryan Smith, a skilful English-born midfielder with Jamaican roots, who started and played the full game against Philadelphia. He is looking to attack.

"This week the emphasis is on finishing our chances," Smith told the club's website.

Today Vancouver Whitecaps, still without ailing Jamaican rookie Darren Mattocks, travel to Columbus Crew, with Jamaican defender Shaun Francis fighting to keep a starting spot. Francis was benched in last weekend's 2-2 draw with Houston Dynamo, but came on as a substitute for the Crew, now 2-3-1 and seventh in the EC.

That result also negatively affected Houston, with the Jamaican pair of Je-Vaughn Watson and Jermaine Taylor starting against Columbus. They fell to fifth in the EC with a record of 2-1-2. Today Houston travel to DC United.

The win did not lift Portland from the bottom of the WC, however, with a record of 2-1-1. Today they go to Canada to tackle Montreal Impact, with the Jamaican duo of Donovan Ricketts and Shavar Thomas. Montreal are struggling too, second to last in the EC with one win, five losses and two draws.

Today New York Red Bulls and Reggae Boy Dane Richards will look to bounce back from a 4-1 thrashing by DC United last weekend, when they host New England Revolution. Richards started, but was subbed against DC. New York dropped to third in the EC with a 3-3-1 record.