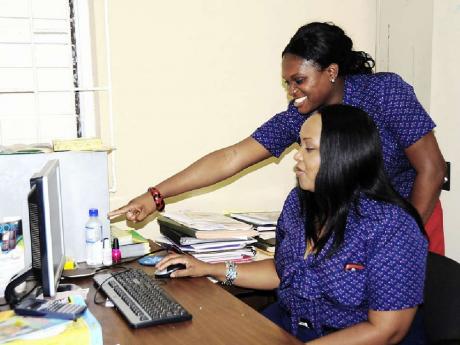 With a monthly budget exceeding J$500,000, and a grant from the Government that only covers the salaries of the staff, volunteerism has been crucial to the operations of the Flanker Peace and Justice Centre.

Almost 300 residents pass through the doors of the decade-old facility on a weekly basis to capitalise on the numerous programmes on offer. Executive Director Marilyn McIntosh Nash believes that the centre has kept going because of the contribution of the volunteers.

"Volunteerism has been the backbone of the centre from day one," she told Western Focus. "They (programmes) are extremely costly, and it is not an easy task to attract sponsors in these tough times."

The majority of those who give of their time are from the immediate communities, with a few 'outsiders'.

"They are not all qualified teachers, but they have abilities in several subject areas and they are willing to give us two hours of their time each day, and that is priceless," the director added.

"My staff of seven are the only ones that are remunerated, and there are occasions that they have been forced to wait for weeks to be paid, but they are still here every day."

Firms have stood behind them, however, none as much as the Sandals Resorts Group.

Sassanae Ainsley, a member of staff since 2011, has been associated with the centre since 2009 when she started as a volunteer teaching CXC office administration and social studies.

"It was a challenge when I was growing up," she said. "I never had anyone to support me, but I got my education and decided to give back because I wanted to make a difference."

The satisfaction, she said, comes from the sense of achievement expressed by the students on getting their results.

The first three computers at the centre were from a local school that had no further use for them. There was no Internet connection. LIME came to the rescue, however, and established an Internet café for the facility.

The males in the community have also played an integral role by donating their labour during phases of construction to expand the facility when a lack of space forced the staff to conduct some of the classes at the exterior of the building.

"It would rain, yet people still would not want to go home. So we had to be good with our time management to ensure that we conducted all our programmes," said McIntosh Nash.

"We begged material and the men did not wait until we asked. They offered, and with a smile each day worked until the task was completed."