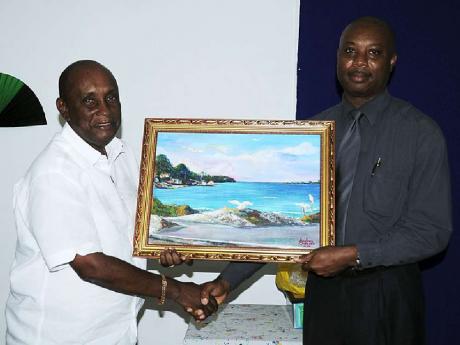 Superintent Dermot Lawrence (right), the new commanding officer of the Westmoreland Police Division, accepts a painting from Michael 'Fishie' Chambers of the Hanover Civic Committee during a function in the senior cop's honour at Global Villas in Hanover last Friday.- Photo by Mark Titus 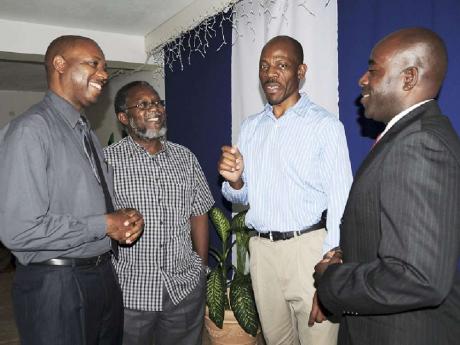 A wide cross section of the Hanover community attended an appreciation ceremony to honour the former divisional commander for the parish, Superintendent Dermont Lawrence, last Friday.

The event - a collaborative effort by the Hanover Civic Committee and members of the Hanover Police Division - was also used to welcome the new commander, Superintendent Lynford Rhooms.

Lawrence, who served the parish for almost seven years before being transferred to take charge of the Westmoreland division, received plaudits from those who came out to show their appreciation.

"Superintendent Lawrence defines professionalism," read a citation from the more than 150 police personnel that were once under his command. "We see you approach every task and situation with an attitude that is unquestionable."

'Lecturer', 'teacher', 'motivator', 'fearless', 'no-nonsense', 'fair' were some of the words that were used to describe the tenure of the senior cop.

There were also greetings from Assistant Commissioner of Police Karl Williams, officer in charge of the Area One (Trealwny, St James, Hanover, and Westmoreland) Police Division.

Custos of Hanover Dr David Stair lauded Lawrence, who was transferred to his parish in the early part of 2006, for his all-inclusive style of leadership.

A somewhat emotional Lawrence, in his response, thanked the citizens of Hanover for their cooperation and challenged the police in the division to continue their work with professionalism.

"Grow with the process and never lose sight of serving," he said. "Try to better what you have done in the past, and most importantly, support the new commander."

Rhooms is on his second transfer to the parish of Hanover. The career cop has also served in St Thomas, the now-defunct Special Branch, the National Intelligence Bureau, and the St James division.