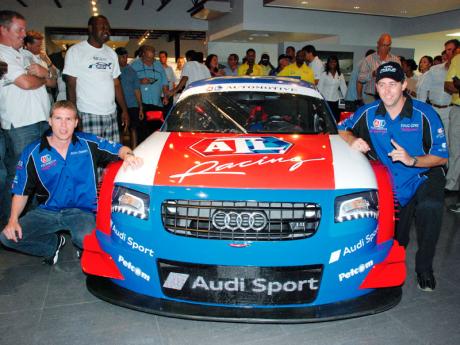 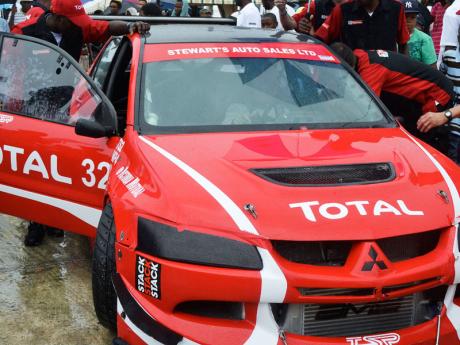 Members of David Summerbell's team ensure that his Mitsubishi Evolution 8 is ready for the track.- File
1
2

Doug Gore is, undoubtedly, one of the finest circuit racers Caribbean motor sport has seen over the past decade. When Gore and his sponsors introduced the Audi TT to Dover last year, it was a shot in the arm for the sport. Thousands crammed the track, race meet after race meet, to witnessed the on-track battles between Gore and David Summerbell Jr, especially.

However, with less than a month before the first leg of the Caribbean Motor Racing Championship (CMRC) gets under way, the 44-year-old Montego Bay-based businessman is contemplating quitting circuit racing if the CMRC authorities do not consider, or permit him to compete, in this year's championship. The crux of the matter is the weight stipulations.

Gore is being required to add 100lbs to the 2,680lbs his Audi carried last year in order compete in the Caribbean championship. He wishes the Jamaica Race Drivers' Club (JRDC) to intervene on his behalf with the regional authorities, but Hilary Jardine, a former president of the JRDC, stressed that while it is important to adhere to rules in the interest of the development of motor sport in the region, sometimes amendments have to be made to the rules.

"The regional drivers have been asked to conform with the weight restriction in accordance with the rules and regulation," said Jardine, one of the pioneers of motor sport in the Caribbean.

A former Cornwall College daCosta Cup football player, Gore signed a three-year contract with sponsors ATL to drive the Audi. However, he is now unsure if he will continue to do circuit racing. "I am in the middle of nowhere," Gore said.

A number of his colleagues believes the sport will be impacted negatively if Gore quits. "Everybody wants to see him race, but it is a difficult situation because the rules were there even before Doug acquired the Audi. I will be very disappointed if he quits. I am confident that he will not; he will find a compromise," said Gore's archrival David Summerbell Jr.

"Rules evolve over time. It would be nice to have Doug on the team in the CMRC, but if he decided to quit circuit racing, then the 'Hollywood' spark will be really missed at Dover," commented Peter Rae.

According to Alan Chen, if Gore calls it a day, it would be very disappointing and have a negative impact on the sport.

"Because of Doug and his sponsor's input, circuit racing has grown over the past year. Hundreds of persons have trek down to Dover to see the Audi and, if he quits, then we are going lose out big time," says Nigel Edwards, one of the drivers who competes in the MP3 and Bracket 32 classes.

However, there is the perspective that if Gore goes, the show will go on. "If Doug quits, circuit racing will not stop. Every driver has a number of fans. He has a huge following, and if he calls it a day, for sure, he will be missed, but circuit racing will continue," said Troy Riley.

One of Gore's rivals in the Thundersport category, Chris Campbell (who partially rolled in his BMW at this year's Easter Monday Carnival of Speed meet), believes that circuit racing will be impacted negatively if Gore quits. "But like many greats who have come and gone, circuit racing will not stop," argued Campbell.