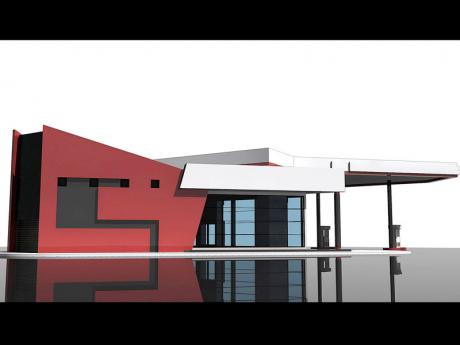 Correction & Clarification
It was stated that architecture firm Plexus was working on designing two Total gas stations. It implied that Total Jamaica Limited was a party to the negotiations and approved the designs. Total Jamaica said it has signed no such agreement and that no dealer has approached it with design plans for stations in either Discovery Bay or Mandeville. We regret the error.

It's a one-off concept which got approval by Chevron Jamaica - operator of the Texaco brand — but Chevron International has expressed an interest in possibly using the design internationally, said the project architect, Euhon Darling of Plexus Limited.

"I was told to design something that would rock the world, shake up the city, and the client liked it," said Darling, adding that neither Chevron nor the engineers Peter Jarvis and Associates made adjustments to the design. The contractor is Noel Scott.

Plexus has since received requests from rival Total Jamaica to design two of its gas stations.

"The modern designs could be duplicated. There is a very high possibility that that could emerge," said Darling, who is also one of the local designers of the upgraded Norman Manley International Airport.

"There are two Totals that we are now working on, one in Mandeville and the other in Discovery Bay," he told Sunday Business.

Darling said that Jamaicans are warming up to modern architecture as it appeals to an international sensibility.

"Jamaicans love it. It's the international modern flair and it's a worldwide trend," he said.

Other modern looking structures include the muscular steel of Norman Manley International Airport and Half-Way Tree Transport Centre, the minimalist interior of Spanish Court Hotel and GeeJam Studio and the Digicel head office in downtown Kingston.

The deal sees century-old GB Group acquiring the distribution and sales of petroleum products in Jamaica, the Dominican Republic and St Maarten from Chevron Caribbean, which owns the Texaco brand.

"The company also completed the sale of certain other fuel-marketing and aviation businesses in the Caribbean and South America in the third quarter 2011," stated Chevron chairman and CEO John Watson in its just-released financials.

Texaco has a network of 62 gas stations, according to 2011 telephone listings. Most of the locally branded Texaco stations are owned by entrepreneurs.

Efforts at comment from Chevron Jamaica on whether the new owners plan to transform the entire national network of Texaco stations were unsuccessful.