The unstated value of a man 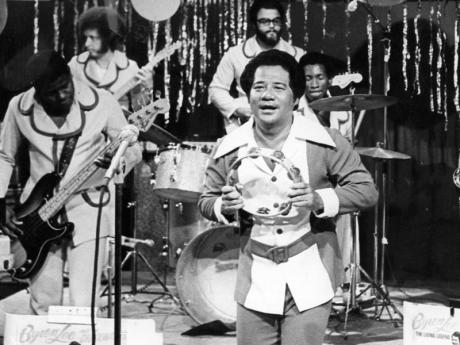 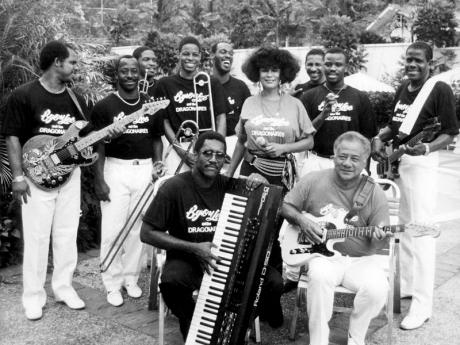 Byron Lee and the Dragonnaires doing a one-hour special in Trinidad during the 1975 Carnival celebrations, where they were a tremendous. - file photos
1
2

In our last article, the Music Diaries focussed on Byron Lee's early years as an unpretentious musician who, along with his St George's College teammates, started playing music with makeshift instruments as a form of celebration after football games. Soon, life was more than football as the band got better, mainly through the assistance and encouragement of old boys, friends and his alma mater. Then came his inclusion in the popular James Bond movie, Dr No, which gave them that all-important financial 'push' that they desperately needed.

The Dragonaires, coining their name from 'dragon', the St George's insignia and 'aires' for music, was and still is essentially a dance-and-party band that started out playing calypso jump-up music in the late 1950s at a number of venues across the island.

They soon added the ska beat to their repertoire and created something historic with their first recording, Dumplins, in 1960 - a remake of Ernie Freeman's blues classic of the 1950s. The recording, done on Lee's own 'Dragon's Breath' record label, became the first Jamaican ska tune to reach the top 10 of the Jamaican charts, bearing in mind that the ska beat didn't take a strong foothold in Jamaica until 1962.

Dumplins, recorded in the Radio Jamaica studios, created another phenomenal music-industry statistic when it became the first ska recording done in Jamaica to be released on the United Kingdom's Blue Beat record label, which was created and authorised to distribute Jamaican recordings in the UK.

Some four years later (1964), Byron Lee and the Dragonaires, led a contingent of singers - Eric 'Monty' Morris, Jimmy Cliff, Prince Buster, and choreographer Ronnie Nazrala, to the New York World's Fair to market Jamaica's ska music and dance internationally. The choice of Byron Lee as the backing band met with strong opposition from various quarters who thought that the Skatalites Band was a better choice.

Producer Clement 'Coxson' Dodd, of Studio One fame, was quoted as saying, "They send people who know nothing about ska to represent it", while keyboard player Jackie Mittoo was blunt in his assertion: "They sent Byron Lee because the Skatalites were ganja smokers."

Lee was, however, quick to refute the claims, stating that he was already booked to appear at the Manhattan Centre at about the same time, and the Government saw it quite opportune to use him since the World's Fair was in close proximity. That apart, he claimed that he had been an experienced campaigner in ska music.

Edward Seaga, who was then minister in charge of culture, and whose brainchild it was, insisted that a recording be made that was identified with Jamaica and the new dance craze. So Lee co-wrote with Ken Lazarus and Keith Lyn the perennial ska tune Jamaica Ska, which included instructions on how the dance was done:

Not many people can cha cha cha

Not everybody can do the twist

But everybody can do the ska

It is the new dance that goes like this:

Bow your heads, swing your arms

Now do a dip

But if Lee's achievements were measured solely in terms of his recordings and his efforts to promote ska and soca music, we certainly would be doing him an injustice. In fact, the tenacious dragon spread his wings in many other directions.

With the help of Ronnie Nazrala and Victor Sampson, Lee, in 1965, created Lee's Enterprise, a concert booking and promotion agency which produced hit show after hit show in Jamaica. This venture brought some of the biggest international stars to Jamaica, including The Drifters, Dionne Warwick, Solomon Burke, Chuck Jackson, Billy Stewart, King Curtis, The Shirelles, James Brown, Sammy Davis Jr, Al Green, Sam Cooke and Fats Domino. It was on a scale unprecedented in the history of entertainment promotions in Jamaica.

growing in the business

In 1968, Lee made his biggest business move when he bought West Indies Recording Limited, formerly owned by former Prime Minister Edward Seaga, and renamed it Dynamic Sounds. Simultaneously, he established a relationship with Ahmet Ertegun, owner of the powerful overseas recording company, Atlantic Records. Lee had his first release on the label, the multi-artiste compilation Jamaica Ska, and followed up with Jump Up. The deal also gave Lee exclusive distribution rights to Atlantic's R&B releases in the Caribbean. In the midst of all of this, he still found time to perform and record albums at least once per year.

Becoming the most popular recording venue in the entire Caribbean, it had, by 1970, attracted some of the biggest American and English rock stars like the Rolling Stones, Eric Clapton, and Paul Simon, whose recording of Mother And Child Reunion, became a showcase for Lee's studio. Roberta Flack also recorded there, the very popular romantic ballad Killing Me Softly With His Song in the 1970s.

Another area of Lee's contribution to music that has been overlooked by many was his musical backing of several top vocal ska recordings of the day. Employing a methodical approach and a uniquely slow rhythmic ska beat, Lee and his Dragonaires brought a new dimension to ska vocal recordings that was different from the hectic pace of many others. With Rupert Bent providing some exhilarating lead-guitar solos, Errol Gayle on rhythm guitar, Neville Hinds on keyboards, Sammy Johnson on trombone, and Lee strumming a distinctive bass, they backed classics like Stranger Cole and Patsy's Come Back, Monty Morris's Sammy Dead and Oil In My Lamp, The Blues Busters' Behold, and The Maytals' My New Name. If You Act This Way, Never You Change, Daddy and It's You. These last two recordings done in 1964, were again historic when, as flip sides of the same record, they both climbed to No.1 on the charts of both radio stations at the time. The only other records to have done this was Under The Boardwalk and I Don't Want To Go On Without You by the Drifters.