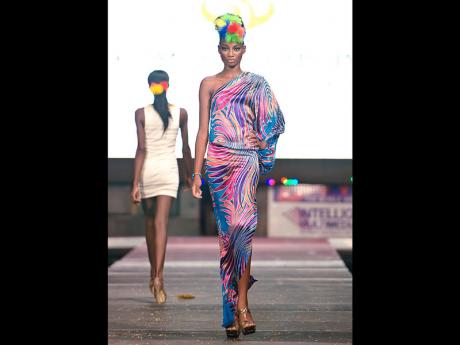 Saint supermodel Shena Moulton is set to be the headline of this season's StyleWeek Jamaica. Here she models an outfit from a collection called Tropical Splendor.- Contributed

As the anticipation builds towards this year's StyleWeek Jamaica (May 23-27), Saint International has announced that the Jamaica 50 secretariat has officially endorsed the event with the 'Proudly Celebrating' designation.

"StyleWeek Jamaica has always been a one-of-a-kind citywide fashion experience like no other. International and local fashionistas alike have embraced the 'Jamaicanness' celebrated at this global event. I am pleased that we can announce that StyleWeek Jamaica was the first fashion event to be assigned this designation," said Deiwght Peters, creator and executive producer of StyleWeek Jamaica.

"The event's creative and unique manifestation is consistent with what we as a people should be celebrating after 50 years of Independence," Peters posits.

Dubbed the world's iriest fashion week in the Caribbean's trendiest city - Kingston, this year's StyleWeek Jamaica will be of special significance.

In validating the 'Proudly Celebrating Jamaica 50' designation for StyleWeek Jamaica, Sydney Bartley, principal director (culture) in the Ministry of Youth and Culture, declared "Fashionblock is the only event of its kind in the world, which reflects the uniqueness, innovativeness, and creativity of the Jamaican character - the essence of brand Jamaica which the world has come to recognise, respect and acknowledge. StyleWeek Jamaica therefore provides a rare opportunity to establish Kingston to be considered an international mecca of style, creativity and panache."

The five days of events unfold at legendary sites in Kingston, taking patrons on an incomparable historical journey. From the bayside themed car park (Accessories Showcase-May 23) to the majestic mansion of Devon House (International Men's Collection, May 25) and the once infamous pirate stronghold of Port Royal (International Mecca Of Style, May 26), to Fashionblock on Knutsford Boulevard on Sunday, May 27, the StyleWeek cross-town dance exposes the intrigue of the city.

Peters revealed that there is a high level of international interest from as far as South Africa and Eastern Europe.

"In the past, high-end fashion publications such as ID, Italian Vogue and ARISE Magazine have done glowing features on the event and city Kingston.