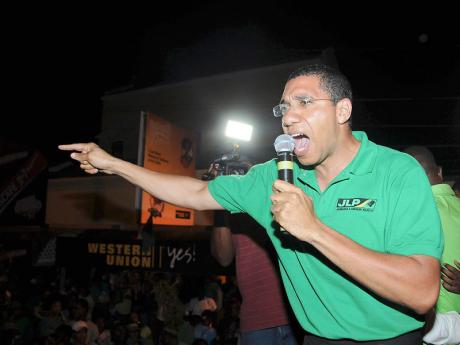 On the election campaign trail last December, Andrew Holness talked a lot about the prospect of 'bitter medicine'. They voted his Government out, but the medicine is coming, JLP or not.- File

No one expects Finance Minister Peter Phillips and his team will be coming back from Washington with any good news. The best we can hope for is that they were able to negotiate with the International Monetary Fund (IMF) for a little dilution of the bitter medicine, or at least some adjustment to the dosage.

The finance minister has already been dropping hints that cuts and trying times are coming in the Budget, and Education Minister Ronnie Thwaites told the country this past week that "there's going to be no new money for education available in this Budget". And he later went to Ocho Rios to tell private schools 'Sorry, we can't help you', as the Observer blared in its front-page story last Thursday. It's wise public-relations strategy to start preparing people for their bitter medicine, though that will not guarantee that it will make it any more palatable.

The Opposition should have its opportunity to crow and grandstand soon. They won't have to seek publicity then, as the media will be flocking them for sound bites and juicy copy once the Budget is presented. And yet what if we, in our 50th year, surprise ourselves by resisting the temptation to indulge in partisan point-scoring? What if we postponed the gratification of gloating over the People's National Party's challenges and prepared ourselves for what is necessary and inescapable if we are to grow this economy?

Actually, we have perhaps the best opportunity today to coalesce around a set of objectives in the national interests. Never before in our history has there been such convergence on a set of economic ideas for pulling this country out of the rut it is in. While the Jamaica Labour Party (JLP) - and Andrew Holness in particular— is more doctrinaire in the neoliberal approach, the People's National Party (PNP), while seeing a more activist role for the State, subscribes to basic principles of macroeconomic stability.

The local private sector and foreign investors can perceive no economic policy difference between the former JLP regime and the present one. The IMF, I am sure, is finding the PNP willing to make the same commitments which the JLP Government made - and expressing the same concerns about effects on social policy. Indeed, some are saying that Andrew Holness was naïve and too open and honest with the Jamaican people in promising more biter medicine rather than offering them pie-in-the-sky promises.

Promoting eucalyptus oil from political platforms doesn't come over very well. Andrew Holness knows that the bitter medicine which Peter Phillips will have to administer would also have to be administered by him if he had won the election. We in civil society must pressure both political parties to come clean with the people and tell them what's possible and what's not.

When the JLP was in power, I used to rebuke PNP cultists and morons who felt manna would be falling from heaven if the PNP were in power. I kept pointing out that our policy options were few and that our structural problems are so deep as to defy easy solutions and that the constraints of capitalist globalisation and an unjust international economic system severely restrict our development prospects.

The PNP, to its credit, was very responsible in its election manifesto and did not seek to sell the people snake oil, but, commendably, levelled with the people. The party did say in its manifesto that: "The PNP is mindful of the economic challenges, both global and domestic, and recognises that there will be limited options within which to manoeuvre". It went on to say, "the task ahead will not be easy but. we will seek to engage the population in the difficult decisions which we will have to make". Yes, that is in the PNP manifesto. The PNP manifesto also has this: "The PNP fully acknowledges that there is no easy solution for resolving the economic crisis. There are limited options."

This shows political maturity and is in response to strong civil-society lobbying and advocacy, including The Gleaner's editorials, which have done an admirable job in urging honesty in economic discourse and in highlighting the need for fiscal prudence.

I quote the PNP manifesto to say we can reduce the propaganda decibels a bit, for the PNP did commit itself to the trinity of reforms which form part of The Gleaner's theology: public-sector reform, tax reform and pension reform. Pension reform will mean people will be taking more out of their pockets to fund their pensions. Tax reform will mean small business people and others (including big business people) who are not now paying taxes will have to start paying taxes and those who never used to pay taxes will simply be passing on the costs to poor people. And there is no guarantee that public-sector reform will be painless, try as mightily as the Government no doubt will.

Here's the issue: Both parties have essentially the same set of economic policies. What if the Opposition would break tradition at budget time this year, forego this grand opportunity to bash the PNP and get even, and instead agree that the measures are necessary, painful though they are? Fantasy, eh? We are not ready for that in our 50th year?

I actually believe that Andrew Holness has it in him for that kind of statesmanship. I know he can't totally abandon the political games for he has a national party constituency to appease (and some already consider him too naïve and goody-goody, easily goaded by civil society and the media elite). Yes, score some points, if you must, but make some space for national interests.

Educate the Jamaican people about some of the painful things which are necessary. And, by the way, my Leftist friends - for the few who are still out there - these painful measures are necessary, even if one were building socialism. Except we are going to adopt autarkic policies, opt out of the international trading and economic system (and there is no Soviet empire to back us anymore, remember?), austerity and sacrifices are necessary. I mean, look at that recent Economist front-page special feature which shows that even Cuba, a long-time socialist hold-out, is now moving steadily toward capitalism.

Our economy is just not productive and competitive enough, and whoever is in power, of whatever stripe or colour, will have to administer some bitter medicine and painful adjustment.

Socialist societies are oriented culturally for self-sacrifice and struggle. Socialists realise that if people are to gain their liberation, they have to free themselves of the bourgeois notion of what is the good life - that is, excessive consumerism, hedonism and acquisitiveness. The Cuban Revolution has lasted this long because the Cuban people have done without a lot of the things that we believe are essential to life. We would not be happy with necessities for all and luxuries for none.

So, my point is that we as a nation have to agree that some postponement of gratification is necessary; that belt-tightening is inescapable, and that all have to sacrifice. Now I agree that our political leaders must set the example. They can't be having all the trips in the world, hosting all the lavish parties and 'dos', driving the best SUVs, enriching themselves and their friends and then preaching austerity to us. No, they must be seen as making sacrifices. And to quote the Bible, "To whom much is given much is expected." Our political leaders must give more. They must sacrifice more. They must lead by example, not by preaching.

Our upper classes and our business sector can't be preaching sacrificing to the masses while not being prepared to give up anything. Moral authority will come through coherence between talking and walking. But, having said that, we need a national consensus - and civil society must demand this - that some bitter medicine is needed to cure our economic cancer. We in civil society must not allow political partisans to seek to exploit our economic crisis by inflaming people's passions and fanning their ignorance on economic matters.

My message has been consistent throughout political administrations. The archives are there for you to research for yourself. I have never countenanced the foolish and cynical propaganda of the PNP and the JLP, which have both sought to profit from people's misery and pain. When the JLP is in power, PNP fanatics talk nonsense about "JLP wickedness" and "not loving poor people". And when the PNP is in power, JLP cultists return the favour by spouting similar nonsense. We must call off this game.

This Budget will be hard on us. What we must ensure is that the sacrifices will be worth it. That is what we must insist on. But ordinary citizens have their part to play. That first-rate intellect, Ronnie Thwaites, a master at connecting the dots, made an important statement last week. He told parents: "Put the contribution towards the child's education before the cigarettes and the liquor and, for mothers, before the hairpiece and the nails." Yes, we need a revolution in values and attitudes. It's not just a Government and Opposition thing.

Panos last Thursday released a study, 'Infidelity: A Driving factor of HIV and Aids in the Caribbean'. It showed how infidelity and sexual promiscuity hold back progress in Jamaica and other countries with high HIV/AIDS infection. Being able to say no to transactional sex, despite your hungry belly, is important to our development. The ability of men to keep their pants up in the face of women with their "boom boom tun up" is important.

Thwaites is right again: "There are many who believe that if you can buss a tune or if you are a lady and take off enough of your clothes ... or master the lottery scam, you can get through life," so that education is not necessary. If you don't fix those things, the macroeconomics won't matter.