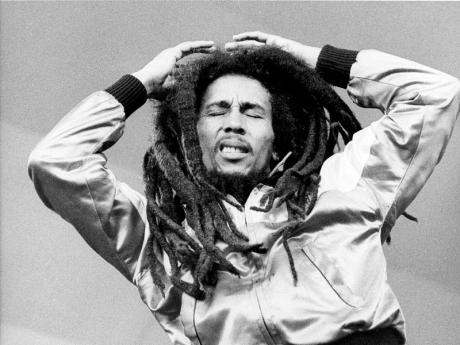 If you walk into the highest Nepali village in the world, on the way to Mount Everest, a set of men will talk to you in join-up (cursive), say some things in an accent that sounds somewhat like the Indian tongue and you might recognise only two words: Bob Marley.

The magnanimity of this Jamaican and his impact on the world is nothing short of amazing. Because of Marley, many non-Jamaicans would have agreed with me about the missing red in the Jamaican national flag because 'Ites', gold, green and black are the colours associated with him.

Marley's image, music and even his obscure conversations and interviews are far more recognised today than any other icon or image of Jamaica, bar none. In remote parts of China, Vietnam and even North Korea, Bob 'Mahreh' and 'leggae' music are easily 'lecognised'. Whatever one might think of Marley, he has put Jamaica on the map.

However, there would not be a Marley without Marcus Garvey and

the strong pan-African influence he had. Few people know that Garvey's UNIA flag influenced the design of the Ghanaian standard and that the work leading to the independence and constitution of Kenya was done with the input of Jamaican Dudley Thompson, who himself was a Garveyite. Indeed, so awesome was Garvey and his message of African unity and pride that he was the one who gave the ideas to the pan-Africanists, including His Imperial Majesty Haile Selassie I.

Yes, after Jesus Christ, the most well-known and followed black man who ever walked the earth, Malcus (as spelled on his age-paper) Mosiah Garvey is the black man who has had the most impact. Garvey even influenced the Rastafarian and other Jamaicans in changing the English language to virtually discard the noun uplift, for the longer 'upliftment', which cannot be found in any dictionary.

This word and the ubiquitous 'fundamentally' rang for the better part of two decades between 1972 and 1992 when Michael Norman Manley changed the landscape of world politics and the image of the developing world from being the Third World with lesser leaders and intellects. Manley, a vice-president of Socialist International, made every world leader stand up and recognise this Caucasian-looking Jamaican, who embraced his one-fourth blackness. No Jamaican head of government, before or since, has been a true global leader. Whether one likes him or not, and for all his shortcomings, Manley is the one Jamaican prime minister since Independence who placed Jamaica in the centre of global politics.

These three Jamaican mega actors have made their mark on history, in the sense that they profoundly changed things about the way we think of other things.

Our athletes have shaken up the world since 1948 at the London Olympics. Prior to 1997 when the IAAF finally allowed track and field athletes to properly 'eat a food' as professionals, the name Merlene Ottey resounded throughout the four corners of the earth, assuming that the globe isn't round.

Nonetheless, since 2008, when lightning bolts struck the Bird Nest Stadium in Beijing, China, the Jamaican who has eclipsed the impact of his erstwhile famous countrymen has been Usain St Leo Bolt. A man who obliterated the 100 metres record by the largest margin since electronic timing measured it, this phenomenon celebrated 20 metres out. No Jamaican alive or dead has crossed into the category of Garvey, Marley, Manley and now Bolt.

Recently, Prime Minister Portia Simpson Miller was placed on the list of the 100 most influential persons by Time Magazine. It is a list which comprises not all positive role models, as there are persons there who are considered racists, dictators and terrorists. Some of the listed are individuals who I wouldn't want to sit on the same bus with, much less be on the same list.

Nevertheless, influence is influence, and it is significant that another Jamaican has made a list of global import. However, not wanting to diminish her light, the question has to be asked, to whom is she influential? Perhaps the six million Jamaicans on the rock and in the diaspora are the subject, as I doubt she is anywhere as well known globally as Bolt, who influences multibillion-dollar sales, yet didn't make the final list.

Time suggested that it is because of her advocacy of full civil rights for gays and lesbians, "a courageous move in a country with a violent history of homophobia". Needless to say, that rationale is untrue, because we are certainly not as homophobic as has been misrepresented from Time to Time. Furthermore, while Portia said she believed the buggery law should be reviewed by Parliament, her Comrade colleagues went to great pains to argue that she did not give a commitment to repeal the law.

In any event, as I stated in an earlier column, it is the Charter of Rights introduced in 2011 which has opened the door to the decriminalising of buggery. Thus, since it started back with P.J. Patterson in 1999 and was passed under Bruce "not in my Cabinet" Golding last year, she can't take any more credit for it than the other 59 MPs.

Nonetheless, there is another controversy in a country which breeds news from nothing sometimes. Does anyone remember Hofi Karlsdottir? Well, she was a 1980s Miss World. However, I am willing to bet that nobody knows who she is. Therefore, the idea of a beauty queen who did not win becoming a global role model is more an illusion and an aspiration to grandeur than reality.

The revulsion that is being expressed at Miss Universe runner-up Yendi Phillipps' pregnancy is for a different reason. One will recall that in 2006, Sara Lawrence got pregnant as a reigning Miss Jamaica. While there was outcry, the excitement was nothing compared to the present. Perhaps the explanation is that the child's father is still unknown, except to her, I hope.

This present drama reprises the 1970s sortie between former Miss World, Cindy Breakspeare, and then reggae superstar, the aforementioned Marley. This Marley, whose onstage and offstage work can only be described as 'seminal', was not repelled by oestrogen, higher social status or the lack of melanin and had a penchant for paramours of his skin colour and lighter. He produced almost as many progeny as the years he spent on earth with women who looked more like his absentee father than his mother or wife who looks like her doppelgänger.

It is uncertain what might have been his motivation for seeking brownings or pigmentary-challenged beauties, who were inclined to parade their female anatomy and processed hair in an unrastafarian manner. One theory could be that he was seeking his father by exploring the women who looked more like Grandpa Marley. Or it could simply be his rebellion against the vestiges of the colonial forces. After all, Marley was a rebel, albeit a 'Soul Rebel', and liked the idea of drawing Bad Card and wanted to 'disturb his neighbours'.

Whatever forces impelled him, the public found repugnant the idea of the pretty, white-looking global beauty queen consorting with a "dutty natty-head Rasta Bwoy". Up to his death in 1981, Marley was not a well-appreciated folk hero, and he only got the Order of Merit when his death was imminent. Had he still been alive, it is moot that he would have been so revered.

As regards this non-news item with Asafa Powell's ex-girlfriend who has now conceived in less than 9.72 seconds into the relationship with second-generation Rasta musician Chino, it is the same old prejudices.

Chino is not a Marley and is not a brown-skinned heart-throb like Shaggy, and despite being infinitely more talented than Jewish Sean Paul, is not as accepted. We still live in a society that is uncomfortable with itself.

When we have a political leader who can fundamentally change our prejudices and legacies of slavery, then we will know that it is Time. By the way, the Marleys should build a school for the 'upliftment' of Jamaicans.